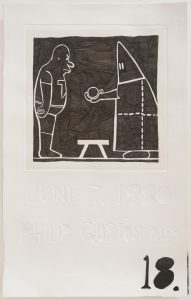 Epidemic! Presents: Step and Screw!, a series of thirty works on paper by Trenton Doyle Hancock (b. 1974), combines illustrations and text in a comic strip-like format. Mounted on the top half of each page, black-and-white ink and acrylic drawings on paper depict Torpedoboy—one of Hancock’s alter egos—answering a call for help, only to find himself dangerously surrounded by hooded Ku Klux Klansmen; while on the lower half, the artist carves dates and short historical inscriptions of personal and communal significance.

This is the artist’s first overt confrontation of racial injustice, blending anecdotes from his upbringing in North Texas, the political history of racism in the American South, and art historical references to the hooded and masked figures in the work of modern American painter Philip Guston.

For this presentation, Epidemic! Presents: Step and Screw! will be installed in a shed, constructed in the centre of the gallery and illuminated by a single light bulb, echoing the story told in the ink drawings. On the exterior walls of the shed and the surrounding gallery walls, the artist will create a new tableau of related site-specific drawings, extending the narrative beyond the thirty framed works into the exhibition space and visitor experience.

About Trenton Doyle Hancock
Houston-based artist Trenton Doyle Hancock has been the subject of numerous solo exhibitions, most recently at the Contemporary Art Museum St. Louis in early 2018. Featured in the 2000 and 2002 Whitney Biennials, Hancock became one of the youngest artists in history to participate. Hancock’s work is in the permanent collections of The Museum of Modern Art, New York; Whitney Museum of American Art, New York; the Metropolitan Museum of Art, New York; the Studio Museum of Harlem, New York; Brooklyn Museum, New York; San Francisco Museum of Modern Art, California; Dallas Museum of Art, Texas; Museum of Fine Arts, Houston, Texas; and Modern Art Museum of Fort Worth, Texas among others. He received his BFA from Texas A&M University (1997) and his MFA from Temple University (2000). In 2019, he was awarded the Texas Medal of Arts from the Texas Cultural Trust.

Major funding for the Contemporary Focus series is provided by Cecily E. Horton.