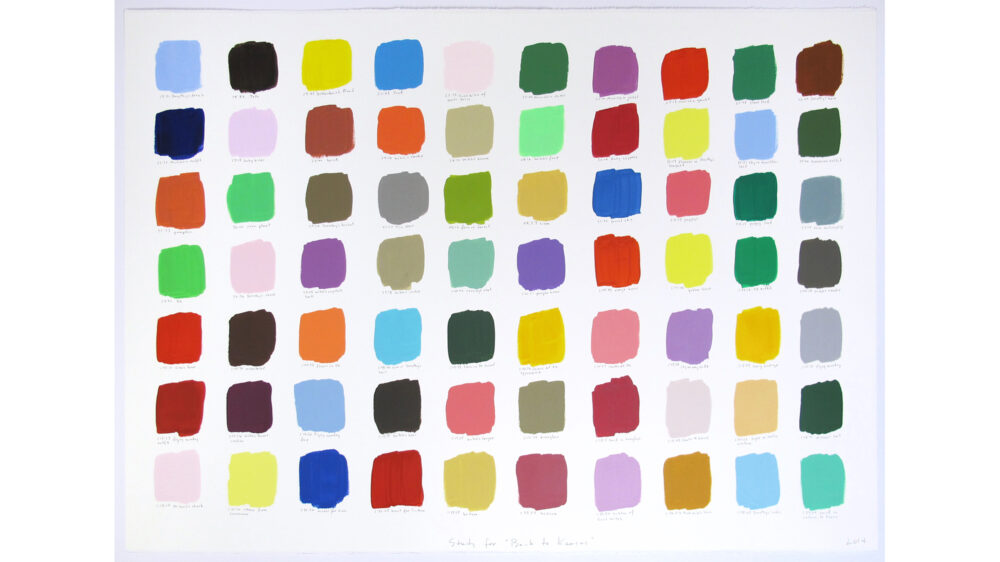 Spencer Finch, Study for Back to Kansas, 2014, acrylic and pencil on paper. McEvoy Family Collection. Courtesy of James Cohan

McEvoy Arts’ fifth anniversary exhibition celebrates the many ways that color is used to convey meaning and elicit emotion.

Barnette’s installation is a tribute to family in rainbow hues celebrating connection and legacy. Hennessy’s gilded wall works evoke the complex racial and colonialist histories embedded in the colors black and gold. Rojas’ portraits of a girl play with how color palettes and shapes can suggest space, character, and mood. Ziegler’s paintings are as complex as the imaginary landscapes of Hieronymous Bosch, delving into memory as fiction in the digital age. These new works are complemented by a selection of painting, sculpture, and photography from the McEvoy Family Collection by colorists Etel Adnan, Ricci Albenda, David Alekhuogie, William Eggleston, Spencer Finch, Marilyn Minter, Gordon Parks, David Benjamin Sherry, and others.

These works speak to various color theories that abound in science and the arts. In ancient Greece, Aristotle held that deities sent down color from the heavens as celestial rays. In the seventeenth century, Sir Isaac Newton’s experiments with prisms led him to theorize that the real basis for visible color is in light itself, linking color systems to musical notation. For numerous visual artists, filmmakers, and designers, color is a both a means and an end. It is a tool for communicating stories, values, and ideas, as well as an expression of beauty, pleasure, and feeling in and of itself.

Color Code is accompanied by Visible Light, a program of short films in McEvoy Arts’ Screening Room about the relationship between light and color in the moving image; The Fifth Edition, a special anniversary newspaper showcasing color in the graphic arts; and workshops hosted by color specialists illuminating its important role in arts and design.