McEvoy Foundation for the Arts: “certainty is becoming our nemesis” 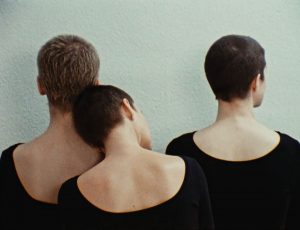 Certainty is becoming our nemesis is guest curated by Steve Polta of San Francisco Cinematheque. The program is produced and was commissioned by McEvoy Foundation for the Arts in conjunction with Orlando, guest curated by Tilda Swinton and organized by Aperture, New York.

A note from the organizers: The world has become profoundly more uncertain due to the spread of COVID-19 since certainty is becoming our nemesis debuted at McEvoy Foundation for the Arts’ San Francisco gallery in early February 2020 alongside the exhibition Orlando. In light of the gallery’s temporary closure to combat the pandemic, San Francisco Cinematheque and McEvoy Arts have partnered to make the program available online in its entirety through May 2, 2020 in the hopes that the works of these extraordinary artists may provide comfort, inspiration, and even escapism to viewers worldwide during this very uncertain time. Cinematheque is proud to present this version of certainty is becoming our nemesis as its inaugural online exhibition.

certainty is becoming our nemesis

I’ve been thinking about how certainty is becoming our nemesis. How doubtlessness is killing our ability to expand as a society and as individuals. How the once essential search for a definable and immutable, identity has become stifling to our sense of development and the possibilities of finding true fellowship with other complex, variously wired, hesitant sensitive beings. (Tilda Swinton, “Orlando: Spirit of the Age,” Aperture, Summer 2019, #235)

If John Cage’s 1952 composition 4’33” and its landmark performance are seen as a refusal to commit or to perform, then it should be said that the piece also inaugurated an aesthetic of ambiguity and expressionlessness, one that has whispered like a queer phantom through Western art. Today, as the boundaries between self-expression and participatory surveillance—in both public settings as well as online platforms—are becoming increasingly blurred, ambiguity of identity has manifested for many as a crucial survival strategy and act of social and political defiance.

At the same time, as discourse on gender fluidity has become much more mainstream, it has extended into a rich and exciting new canon of contemporary artworks. The film and video works in certainty is becoming our nemesis illustrate this trend, foregrounding the expansive possibilities of personal invention and the assertion of self in radically new frameworks. Virginia Woolf’s 1928 novel Orlando, as well as Sally Potter’s 1992 film interpretation—with Tilda Swinton’s defiantly ambiguous portrayal of the title character—are deeply prescient to this moment in which certainty, as a principle, is in question.

Drawing inspiration from the resonant exhibition Orlando, certainty is becoming our nemesis presents works on themes of transformation, self-invention, gender performance and family—chosen and otherwise. While flirting with notions of timelessness and perpetuity, these works refute notions of stability and offer radical gestures of intimacy. (Steve Polta, January 2020)