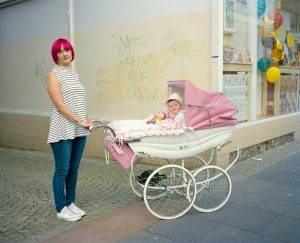 In 2011 Niall began what would turn out to be an extensive series of portraits that would take him across the whole of Britain. From Dingwall in the Highlands of Scotland all the way south to Bodmin in Cornwall, he has shot over 2000 portraits in more than 200 towns over the course of seven years.

“Initially I began taking portraits on the streets near to where I live in south London, building a small series that would show the diversity of the community I live in,” he explains. However, within weeks he had branched out to cover the whole of the capital and then within months to cover the whole of Britain.

Niall has chosen to photograph the characters he meets in a distinctive style: often they are dressed in bold colours and patterns and shot against correspondingly colourful backgrounds. “Through this series, my aim is show Britain as a diverse and multicultural society at a time of huge change,” he says.

The Town To Town exhibition at the Martin Parr Foundation will feature more than 70 portraits from across Britain.

Niall is from Aberfeldy in Perthshire, now living and working in London.