Martin Parr Foundation: Markéta Luskačová “By The Sea: Photographs from the North East, 1976-1980” 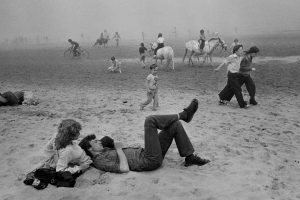 Photographs by Czech photographer Markéta Luskačová taken on the North East coast of Britain in the late 1970s will go on display at the Martin Parr Foundation to coincide with the first publication of this series of work by RRB Photobooks.

“I was thirty-two when I saw the northern sea for the first time. It was at Whitley Bay near Newcastle. The sea was grey, breathtakingly grey, as was the sky. But what was overwhelming for me were the people at the beach, dressed in their Sunday best. In spite of harsh weather, the wind and the rain, they were enjoying their day out and making the best of it for themselves and their children.” – Markéta Luskačová