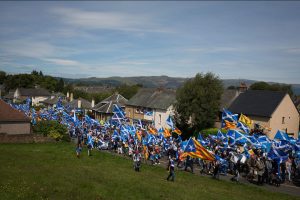 A Contested Land examines the complex relationship between Scotland’s people, history and landscape through the work of four photographers. The contrasting series of works by the collective known as Document Scotland, will be exhibited at the Martin Parr Foundation for the first time before it is shown at venues in Perth, Dunoon and Inverness during 2019.

Document Scotland was founded in 2012 by four photographers – Colin McPherson, Jeremy Sutton-Hibbert, Sophie Gerrard and Stephen McLaren. Tired of the tropes and clichés which are often used to represent Scotland, their aim is to provide an accurate view of their nation today and disseminate their work beyond the borders. Although their work is contemporary, it acknowledges the past and its resonance with the present.

They work in a Scotland where vast tracts of wilderness have been scarred by centuries of mismanagement, marine resources are controlled by five all-powerful fishing families, the wealth of the richest is 250 times that of the poorest, and the population of its major cities continues to expand, whilst population growth in many other areas is flat lining, or even falling at an unsustainable level. With impending Brexit, climate change and unforeseeable global events, it is not possible to predict where Scotland will be in a generation’s time. It is against this backdrop that Document Scotland have created A Contested Land.

Born in Edinburgh, Colin McPherson has been photographing in Scotland and abroad for more than 25 years and is represented by Getty Images. McPherson’s work is published internationally and held in archives and collections such as the Scottish National Photographic Archive and the University of St. Andrews University Special Collections. His photography has been featured in more than 30 solo and group exhibitions. His major Document Scotland projects include A Fine Line, The Fall and Rise of Ravenscraig and When Saturday Comes, which was exhibited at the Scottish National Portrait Gallery in The Ties That Bind.

Jeremy Sutton-Hibbert grew up in Scotland and is a freelance photographer for editorial, corporate and NGO clients. His work has appeared in magazines such as Time, National Geographic, Italian Geo, Le Figaro, The Guardian and The Sunday Times amongst others. For over a decade, Sutton-Hibbert has been one of the principal photographers for Greenpeace International, and his assignment work for editorial and corporate clients has taken him to over 100 countries. His personal and commissioned work, for which he has been the recipient of photojournalism awards, has been widely published and exhibited in Europe, Asia and USA.

Sophie Gerrard began her career in environmental sciences before studying photography at Edinburgh College of Art, and an MA Photojournalism and Documentary Photography at The London College of Communication.  Working regularly for clients such as The Guardian Weekend Magazine, FT Magazine, The Independent and The Telegraph Magazine and on long-term self-initiated projects, she pursues contemporary stories with environmental and social themes. A recipient of a Jerwood Photography Award and Fuji Bursary amongst other awards, Gerrard’s work has been exhibited and published internationally and is held in numerous national and private collections. She is represented by The Photographers’ Gallery in London.

Stephen McLaren was a television director and journalist making documentaries for the BBC before returning to photography in 2005  His work has been shown in several exhibitions including: Onto the Streets at Photofusion in London; Eastend Street: Then and Now at the Rich Mix Centre in London; FORMAT in Derby, and Look11 in Liverpool. His work has been published in The Guardian, The New Yorker and The Observer amongst others. He has curated street photography exhibitions which have travelled round Europe with the British Council and he is the co-editor of Street Photography Now(Thames & Hudson, 2010).
Martin Parr Foundation, 316 Paintworks, Arnos Vale, Bristol, BS4 3AR / U.K.

Jeremy Sutton-Hibbert’s work captures the raw and powerful political theatre of Scotland’s parades and marches. Played out in public spaces from Glasgow to Faslane, depicting Pro-Scottish Independence marches to demonstrations against Trident missiles – the photographs collectively show vibrant and lively displays of stand-bearing, placards, slogans and passion. Strip away the banners and confiscate the flags, the adversaries cannot be told apart – they are all Scots. Sutton-Hibbert’s photographs offer a beguiling view of the possibility of an undivided future aside from political discourse and disagreements.