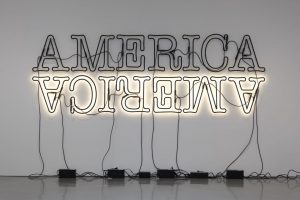 The American artist Glenn Ligon (b.1960) is best known for his landmark text-based paintings, made since the late 1980s, which draw on the influential writings and speech of 20th-century cultural figures including Jean Genet, Zora Neale Hurston, Jesse Jackson, and Richard Pryor. Throughout his career, Ligon has pursued an incisive exploration of American history, literature, and society across bodies of work that build critically on the legacies of modern painting and conceptual art. His subject matter ranges widely, from the Million Man March and the aftermath of slavery to 1970s colouring books and the photography of Robert Mapplethorpe, within artworks that are both politically and formally rigorous.

Ligon’s most iconic works are large-scale, text-based paintings featuring appropriated sentences that are stencilled and repeated to cover the length of the canvas. In these works, the stencil gathers material from the medium—most often oil stick or oil stick and coal dust—as it moves along the surface. The build-up of material obscures the legibility of the text.

Since 1996, Ligon has used James Baldwin’s seminal 1953 essay “Stranger in the Village” as the basis for his Stranger series, which comprises nearly 200 works including prints, drawings, and paintings. Written during a stay in a remote Swiss mountain village, Baldwin’s “Stranger in the Village” examines complex and urgent questions about blackness, white supremacy, and colonialism. Ligon excerpts and transforms this text in this stencilled series, making it abstract, difficult to read, and layered in meaning, much like the subject matter Baldwin addresses.

The Figure series, created between 2009 and 2011, continues Ligon’s engagement with Baldwin’s essay. He made these works by silk screening images of existing paintings onto variously coloured backgrounds and flocking them with coal dust, which builds up the text while simultaneously obfuscating it. These works exemplify Ligon’s investigation into text’s dual role as both formal sign and abstract form in painting. The texts in Figure #13 (2009), Figure #17 (2009) and Figure #76 (2011) have been pushed beyond recognition through a combination of oversaturation and negative space.

While creating these canvases, Ligon kept pages of Baldwin’s essay on his studio table for reference. Over the years, the pages became covered with smudges of black paint, oil stains, and fingerprints. Intrigued by this accumulation of marks, Ligon created a suite of seventeen large-scale archival pigment prints [Untitled (2016)] that document his well-worn copy of the book, using the full text of the essay for the first time in his career.

Featured alongside these works focused on the writings of James Baldwin is the black painted neon Double America (II) (2014). Here Ligon defamiliarizes the word “America” by treating it as an object, which is mirrored and flipped to create an imperfect reflection. This work is yet another example of the artist’s extended engagement with language as a pliable medium.

Glenn Ligon: Selections from the Marciano Collection is curated by the artist.

Glenn Ligon (b. 1960) is an artist living and working in New York. He received a Bachelor of Arts from Wesleyan University and attended the Whitney Museum Independent Study Program. In 2011 the Whitney Museum of American Art held a mid-career retrospective of Ligon’s work, Glenn Ligon: America, organized by Scott Rothkopf, that travelled nationally. Important recent shows include Glenn Ligon: Encounters and Collisions (2015), a curatorial project organized with Nottingham Contemporary and Tate Liverpool, and Blue Black (2017), an exhibition Ligon curated at the Pulitzer Arts Foundation in St. Louis, inspired by the site-specific Ellsworth Kelly wall. Ligon has also been the subject of solo museum exhibitions at the Camden Arts Centre in London, the Power Plant in Toronto, the Walker Art Center in Minneapolis, and the Studio Museum in Harlem, among others. His work has been included in major international exhibitions, including the Venice Biennale (2015 and 1997), Berlin Biennal (2014), Istanbul Biennal (2011), Documenta XI (2002), and Gwangju Biennale (2000).