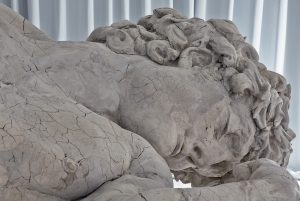 The inaugural exhibition of The Maurice and Paul Marciano Art Foundation draws from the Foundation’s collection of over 1,500 artworks, bringing together an international, multigenerational roster of artists who are among contemporary art’s leading creative and critical voices. With the rise of Los Angeles as one of the twenty-first-century’s global centers for artistic practice, the Marciano Art Foundation has a vision to transform the former Scottish Rite Masonic Temple into a forum dedicated to this thriving community.

Conceived and organized by guest curator Philipp Kaiser, UNPACKING takes its title from German philosopher Walter Benjamin’s 1931 essay, “Unpacking My Library: A Talk about Book Collecting.” Benjamin’s text emphasizes that any order is a balancing act of extreme precariousness. UNPACKING showcases the breadth and depth of the collection while simultaneously creating a loose order where a multitude of meanings collide with a historic site, exposing unpredictable connections. Two underlying thematic threads lead the viewer through the walls of the temple: one focusing on works that emphasize the process of their creation and another to the artists’ archaeological impulses. The abundance of process-based works connects the artists in the collection to an artistic legacy that characterized much of the art of the late 1960s, while the archaeological impetuses point to a prevailing tendency by artists to operate in an investigative mode, mining complex ideas of the artwork’s site and temporality.

The exhibition also underscores the inevitable impact of the temple itself. Between disorder and order, in a state of anticipation and possibility, the arrangement amplifies relationships between the works and the setting, which features major site-responsive installations and a comprehensive solo exhibition by Jim Shaw, entitled The Wig Museum. The dialectic nature of becoming and decaying, appearing and disappearing points in both directions at the same time: the past and the future, a framework that mirrors the entire inaugural exhibition with its promise of an auspicious future while digging through the past.