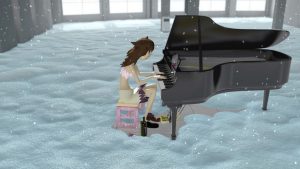 This first solo exhibition in Los Angeles by artist Bunny Rogers (b. 1990, Houston, TX; lives and works in New York) highlights Rogers’ two video works A Very Special Holiday Performance in Columbine Auditorium (2017) and Mandy’s Piano Solo in Columbine Cafeteria (2016). Both animated videos are demonstrative of how media has shaped the artist’s identity as an obsessive consumer and self-proclaimed internet addict since childhood.

Fixated on animated television shows like Clone High and Invader Zim, and websites such as Neopets.com, Rogers grew attached to fictional people and creatures that have become recurring characters in her work. These children’s programs overlapped in time with severe and violent events widely covered by news media outlets, including the 1999 Columbine High School massacre in which 15 students and teachers died, and another 23 were injured. Rogers grew up during the rise of school shootings and cites the Columbine imagery as significant and unforgettable.

Over time, mass shootings have become embedded in our global collective consciousness, contributing immeasurably to our understanding of tragedy.Our capacity to process human suffering continues to expand by way of forgetting, desensitization, and disassociation—consciously or unconsciously, we all fall victim. The events, oftentimes too painful to remember, are forgotten and thus wiped from history. We erect publicmemorials and assign days of remembrance, but healing happens in a private space, undertaken individually.
“Today the media landscape looks different than it did in 1999. It is nearly indistinguishable from reality, and vice versa. Turning ‘off’ is more or less illusory,” writes Rogers.

Imagery that is horrifying or pornographic, uncanny or manipulative, isconsumed as automatically as any other imagery. By absorbing these images, we are registering them, and Rogers believes that “to register imagery is to corrupt imagery.” How today’s traumatic media will affect ustomorrow is unknown.

Rogers relies on corrupted memories to piece together a narrative that both mourns its origins and begs for resolution. Her videos, A Very Special Holiday Performance in Columbine Auditorium(2017) and Mandy’s Piano Solo in Columbine Cafeteria (2016) depict rehearsals of ceremonies for mourning. In the cafeteria setting, an unnamed character from Clone High—afictional high school filled with animated versions of famous figures from history—who Rogers refers to as “Mandy” plays piano covers of Elliott Smith songs while drinking copious amounts of red wine. In the auditorium, three cartoon teen girls take the stage to rehearse a song for a ceremony that never happens. Rogers’ own voice is heard through the animated character with long hair who sings “Memory” from Cats, Grizabella the Glamour Cat’s song in which she reminisces about the great beauty she once was.

Surrounding these videos are Rogers’ reproductions of typical American high school furnishings. Though not taken directly from Columbine High, the familiar items become stand-in artifacts of the school shooting that evoke and hold memories of the tragic event but retain their original appearance and functionality.

About Bunny Rogers
Bunny Rogers is an American artist based in New York whose practice involves a prolific engagement with digital media and complex narrative. Often referencing her imagination and personal use of online social networks, Rogers’ cross-disciplinary work has incorporated sculpture, installation, photography, video, publication and 3D modeling presented in both physical and virtual forms. The motifs of experience, memory, reality and fiction endlessly circulate within her work, which draws in both subjective experience and external record, creating spaces where existential anguish, the personal and the universal, blur into and feed off one another other.

Rogers received her Master of Fine Arts from the Royal Institute of Art in Stockholm in 2017 and has exhibited at numerous institutions including Whitney Museum of American Art, New York; Musée d’Art Moderne, Paris; Foundation Louis Vuitton, Paris; and Hamburger Bahnhof, Berlin. This is the artist’s first solo exhibition in Los Angeles.