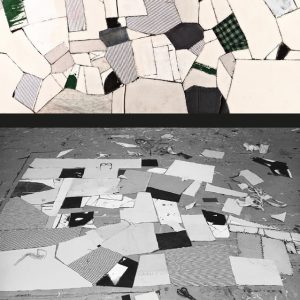 In her first European exhibition, the American painter Sally Ross presents five large works from 2013 to 2015, recently acquired by the Maramotti Collection.

The paintings on display reveal their components and how they came together, the thinking and handwork involved, yet retaining an enigmatic quality, somehow elusive and direct.

The very foundation of Ross’s work is within the reality of where her art comes into being: the studio, and in particular the studio floor, on which her work is initially composed like a map unfolding in various directions, fitted together from any number of pieces and sewn into place, a sort of cubist quilting.

The artist stands above the image-composition, which we may see as an aerial view of a landscape, and she begins to stitch the pieces together. There is a three-dimensionality, not only with the sculptural protrusions in some of the paintings, but with what appear as blocks of a faceted structure.

Certain materials—green and black checked flannel pieces from one of her own jackets, for example—that Ross brings into the canvas, are like the missing parts of a puzzle; actual rather than painted, they suggest trompe-l’oeil in reverse.

Some parts of her paintings are comprised of patterns created and printed by the artist herself, such as fish scales and wood grain, or appropriated from existing materials, the stripes in bedding and in the webbing from a lawn chair, for example.

There is also evidence of mark-making, a sort of action-writing that introduces acts of drawing. Ross freely intermingles painting, printing, collage, sculpture, and drawing.

Despite the playful, performative nature of her work, there is no color for its own sake, its celebration. Ross’s palette, which tends toward a somber, reflective tonality, comes from the studio environment as well. Color in her paintings—from smudged whites and grays to earthen browns and blacks—seeps out from the floorboards and brick walls of the old carriage house that has been her studio for many years.

Ross’s work is equally present and out of time. When looking at her paintings, the artists who come readily to mind comprise a passage from the 1950s, ’60s and ’70s and into our own time: Anni Albers, Lee Bontecou, Alberto Burri, Franz Kline, Robert Rauschenberg, Jasper Johns, Cy Twombly, and Alan Shields; while the organic quality of her work, particularly being exhibited in Italy, resonates with the tradition of arte povera.

Ross’s “combines” reanimate an exploratory period when art in general and painting in particular imagined it could be something else, could be anything else. Despite repeated pronouncements on the end of painting since the later ’60s, her work proposes that it still can.

The very practice of art as an experiment is not a thing of the past, but one of the more visible signs that for artists and for us, it has a future beyond an endless endgame, that painting remains connected to its history and goes on.