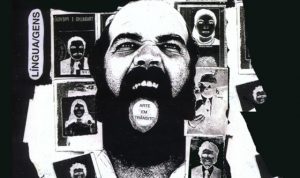 Mouth Shut, Loud Shouts deals with questions of censorship and silencing deeply rooted in colonial regimes. The suppression of speech, information, language and image is expansive and operates in different ways across the globe. Works within the exhibition present how censoring can operate as a mode of marginalisation and delegitimisation. Whilst some work directly opposes forms of state censorship, other works deal with pervasive embodied codes of self-censorship. Importantly the work looks to practices that transgress these modes of silencing and suppression, finding spaces, avenues and aesthetic forms that leak out voices to the world and ourselves.

People are not often told when visiting a culture space what violences you might be confronted with and what situations you might encounter there. Mouth Shut, Loud Shouts holds many disturbing stories and might indeed affect you in ways we do not know. Yet we hope that these stories, these voices communicated through narrative, film and drawings, form new languages to the world. Multiple languages that erode and attack the silencing their communities are subject to, helping us build solidarity across geographies, experience and time.

When you enter, Marabouparken’s exhibition space is largely concealed to the viewer by a new work by Tove Drieman – a large curtain which explores ideas of self-censorship based upon Drieman’s personal experience of growing up in Sweden. The usual bird’s eye view of the space is ruptured and becomes a border dividing the space. If you were to seek beyond this screen you will find an installation by Paulo Bruscky that presents elements of a huge body of work created during the military dictatorship in Brazil 1964 to 1985 and his efforts to break out of the confines of political isolation through a network of letter correspondence. The prevention of communication can be felt in the work of Fikret Atay whose video Rebels of the Dance depicts two young boys singing illegalised Kurdish festive dance songs. belit sağ also explores forms of censorship of Kurdish histories in her video Ayhan and Me in which first-hand experiences of censoring of her own work become entwined in the narrative of the original film that was censored. Alongside this work are a series of documents produced by the organisation Siyah Bant (Black Band) which shows in more detail the process of belit sağ’s censorship case and exposes the process of Siyah Bant to platform and speak out against censorship of artistic expression.

The consequences of speaking out against oppressive regimes are investigated in the compelling film Drapchi Elegy by Ritu Sarin and Tenzing Sonam. The Tibetan woman Namdol Lhamo discusses her story in which a non-violent protest against Chinese rule led to years of imprisonment and a life of political exile. Returning back to forms of censorship much closer to home is a work by Lucy Parker whose long term research into the Blacklisting of workers in the UK construction industry reveals an ongoing struggle against state and corporation censorship and silencing. Posters by Arvid Sveen draw discussions to the Nordic region and the continued oppression of Sami people, the possession of their land and the violent redressing of their culture. This ongoing struggle focuses on the brutal destruction of Sweden’s environment, the pollution of rivers and the industrialisation of land, which has removed the resources their livelihoods rely on.

Moving back towards Tove Drieman’s curtain from this other side of the exhibition space, new forms come into view, shapes that hope to articulate the more pervasive methods of silencing that we embody within ourselves: the words we are trained not to say or the struggles we don’t stand in solidarity with. Contextualising these complex and challenging works is a sensitive and serious task and further reading in our reading room – where we hope you can spend time – explores how we might address and fight against the multiple forms of silencing both from the perspective of the state as well as from within ourselves.