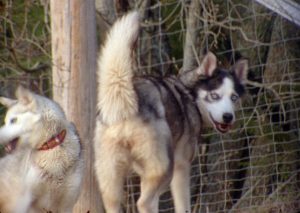 The autumn season is opened with an exhibition by Norwegian artist Liv Bugge, which is built around two video works from 2018, The Other Wild and To accept theirs, to make it mine, to wish it for myself, a sound installation, Instructions to make use of an already present itch (2017), installed objects and a new video work/installation, Play (2019).

In a text accompanying the exhibition that was part of her recently finished PhD at Academy of Fine Art, Oslo, Liv Bugge describes how she connects two magic disappearances: the disappearance of the fossil into the museum structure and into history, and the inmate’s disappearance into the prison structure—away from society. Societal structures here work as magic apparatuses for history writing and perpetuation of the norm, at the same time as those/that which are deemed to belong to these structures disappear from the now, nature/society and normalcy. But the structures’ forced assimilation on bodies is not the only communication that takes place here. The bodies, the living and the non-living, leave traces and imprints behind. In the prison the walls have damages and inscriptions, cavities resulting from aggressions, carved names of people and places. The fossilised trilobite is an image of stone, a hundreds of millions years old imprint of what was once one of the world’s most common animals. Alongside other carbon-based life forms of its time, it forms the base for the fossil fuels of which the Norwegian economy is currently dependent, but is trying to leave behind.

Do they have something to tell, the inscriptions on the prison walls, the fossilised trilobite? Liv Bugge’s works all build on conversations with people, objects, animals and nature. In listening to the other, the own body is opened up to images—she speaks of the body as an image creating apparatus—or words, maybe a scent or a thought appears. To be confronted with that which lies outside of yourself, to establish a dialogue, to gain new insights, new empathy with the surrounding world, can be the foundation for new approaches, new ways of acting in relation to our surroundings.

In the new work that Liv Bugge has made for the exhibition, the video is divided into several projections. The protagonists of the work are huskies, dogs used for sledge-pulling. They are filmed in the big dog yard at her family home. She speaks about her extended family—sometimes up to 60 individuals—that together made up her every day. They appear here and there throughout the exhibition. Showing themselves or not. Also here one has to wait, give the dog time to approach—a reversed act of disappearing/appearing.

The tactile play an important role in Liv Bugge’s works; it is through the body that we communicate and make ourselves an image of the world. The hands sorting stones at the museum, the backs and legs carrying off all that cannot remain, the surfaces of materials, the finger tracing the inscriptions in the prison corridors. It is a tangible world of bodies and other matter.

Many of the works that stem from her work in prisons share the inmates’ situation of being in a closed-off environment, invisible to larger society. They have been installed as public works in the (non-public) places from where they originate and are not possible to view other than as images. That is the case for the concrete wall the artist has had installed in the prison yard: the surface keeps a constant 34 degrees Celsius, the same temperature as human skin. Here one can stand at the wall and experience the warmth, each one on their own, but together.