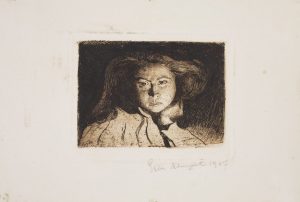 ”Can you see that I live as though in two worlds: one is with my dear friends, artists and sun people. […] And the other life: it is heavy and prehistoric, I would say, Swedish and rustic. […] It is my old life, as a vicar’s daughter in Småland, which can never be erased.

”So writes Ester Almqvist in a letter addressed to her friend Helga Westerberg in 1896. The feeling of living in two worlds marked her entire life and oeuvre; the quiet life in the Småland countryside stood in stark contrast to the existence she shared with her artist colleagues in Stockholm, where she came to be a prominent figure for the breakthrough of modernism.

Ester Almqvist was born in 1869 and was active as an artist from when her studies at Valand in Gothenburg and Konstnärsförbundets free school in Stockholm, up until her death in 1934. Her works depict the quotidian and the simple life, to a great extent, and is throughout characterised by an existential tone concerning what it means to be a human being in a various contexts and roles; in the family, in society, as a worker, as daughter and as artist. The surroundings and scenery of her childhood home Fogdeholm are frequently depicted, as is her family, which consisted of her mother, sister and aunt.

Almqvist’s female relations were of great importance during her whole life, both privately and professionally. Thanks to her colleagues she was able to set out to parts of Europe, during the 1920’s, and paint in countries like France and Italy with Tora Vega Holmström, amongst others.