Marabouparken: Behzad Khosravi Noori “Professor Balthazar and a Monument to The Invisible Citizen” 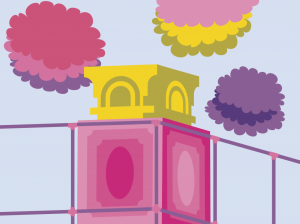 Behzad Khosravi Noori is an artist and researcher who in the exhibition Professor Balthazar and a Monument to The Invisible Citizen uses the then Yugoslavian, now Croatian, animation studio Zagreb Animation School’s singular children’s program Professor Balthazar –a childhood memory shared by people of widely differing cultures and countries around the world- as his starting point.

Balthazar is the clever professor who lives in the colorful and quizzical city Balthazar-grad. He is capable of resolving all the problems of his fellow-citizens with the help of his magic machine. He loves nature, loves all living beings, he protects the weak and fights evil, he is an ecologist, he promotes tolerance and peace. Professor Balthazar is also a time capsule that unpacks the story of a hyper-politicized time and place.

Behzad Khosravi Noori uses his personal experience of childhood in Iran in the 80’s, and of today’s Sweden, as a springboard to, through artistic research, establish a hypothetical but universally coherent connection between personal memories and decisive world events.

In the exhibition Khosravi Noori has built a multimedia monument to an invisible citizen, an interpretation of an actual monument built in the Professor Balthazar episode Martin Makes it to the Top, where we are given the possibility to think, play and rest.

“I have become a queer mixture of the East and the West, out of place everywhere, at home nowhere”. – Jawaharlal Nehru