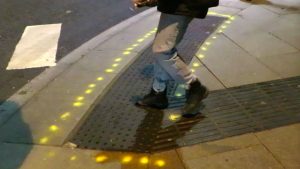 Lisa Torell: ‘The Pavement, a Masterpiece’

Lisa Torell’s exhibition scrutinises components of the welfare state. The works reveal how care and attention, indifference and neglect are manifested materially in and through our urban and public spaces. It is as if she is asking herself: What is it that makes a society a shared space and a society a society?

With a close examination on site, working day and night, Lisa Torell discovers signs of care and consideration, and a lack of the same. She is the body and the eye, making her discoveries simultaneously with the viewer. Bit by bit, society and systems are laid bare, in paving stones, detritus and imprints.

For more than a decade, the artist Lisa Torell has focused her artistic practice on public and semi-public spaces. She uses a site-specific approach to enter into close dialogue with chosen places and situations, individuals, population and society. At Marabouparken works made between 2015 and 2019, for places in Istanbul, Norrköping, Småland, Gdansk, Sundbyberg, Tromsø och Venice, are shown in a large-scale spatial installation.

Lisa Torell works with performance, installation, video, and text. Several of the works shown at Marabouparken were produced within the framework of the Norwegian Artistic Research Programme, for which she presented her thesis Potential of the Gap, in spring 2018. Her practice explores issues related to the public sphere, focusing on relations between place, language and identity in relation to perception, convention, system and logic.

During the exhibition, Lisa Torell will be conducting a parallel programme, which began with the project and book Place to Place, 9 artists reflection about site-specificity and place-related processes (2016-2017), in which she discusses practices and methods with other artists.

In Waterside Recreation, Marika Troili builds upon her interest in words’ capacity to establish their own systems of value. In previous bodies of work she has examined how a number of large companies officially communicate, now she has turned toward the voice of ‘the public’.

The source of the exhibition is in a number of documents from the City of Sundbyberg (in which Marabouparken konsthall is located.), concerning the city’s future development: Sundbyberg 2030 – Urban and Sustainable and Sundbyberg’s New City Centre, amongst others. In these documents the reader will encounter formulations like: “The beach promenade along the Bällsta Stream and Bällsta Bay will be developed into an attractive area, offering waterside recreation and a range of activities”. Hence the title and subject matter of Troili’s exhibition.

The speculative tone of the documents projects a stylised image of the future city, where the water in general, and the Bällsta Stream in particular, plays a significant role as driving force and as social and economical value. Through both studious readings of these documents, as well as methodical wandering and boat rides up the stream, Marika Troili has probed the flow of activity that both circumscribes the water and that the water gives rise to. This is interpreted and mirrored in the exhibition in a way that provides us with new perspectives on the processes that take place in and along the stream. In the gallery a spatial figuration takes form in which the water is both material and meaning.

The stream is also the homestead of beings with other, ulterior motives than those postulated by the city, for example the beaver and the nettle. In a glass display case in the exhibition lays the piece General Plan of The Nettle 2030. Gathered here are general plans from the four municipalities, through which the Bällsta Stream flows, covered beneath a fine powder of ground nettle. The nettle, which on the one hand is considered as an unwanted weed and on the other as a sought after herbal remedy, also becomes a symbol in the tale of the town. A pervading feature in Troili’s body of work is that it at once puts into play an unveiling and obscuring of in the impact the reports have on, and our image of, the future city.

Yet another dimension in Waterside Recreation is the link to the history of Marabouparken and the former chocolate factory (which now houses the gallery), where ideas of the causal relationship between decorative, beautiful environments and good health and morals form the basis of the park’s and factory’s design – ideas that recur in contemporary urban planning.

Marika Troili sharpens our gaze beyond what can be seen by the bare eye. With the help of found materials and objects; through installation, video, photography and text, Troili poetically and tactfully portrays questions of urban regeneration, cultural and natural environments, economies and ecologies (recognised and not), recreation and productivity. In a continuous movement from surface to depth and back, she constructs new systems of linguistics, concepts and perceptions. 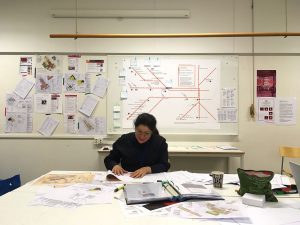 Who owns the city is a cross-disciplinary collaboration that involves investigating surveys, counter-stories and visualization as awareness-raising opportunities in relation to the built environment. By looking at invisible layers in the city, such as ownership relationships and the relationship between public and private, calls are opened about who the city is for and what it could be.

In the guest room at the Marabou Park, they will, among other things, work with the development of a digital tool for collecting data on squares, as well as focusing on stories about the shopping centers in Sundbyberg which have recently been sold and changed owners.

The group has previously, among other things, made a survey of local centers along Stockholm’s metro lines which during 2018 will be exhibited as part of the exhibition Public Luxury at Arkdes.