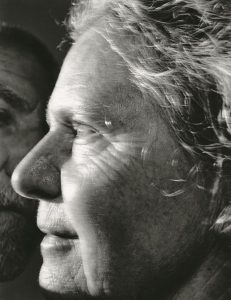 Nicholas Nixon (born Detroit, Michigan, 1947), has occupied a prominent and unique place in the history of photography of the past few decades. Focused primarily on portraiture and with a clear interest in the camera’s descriptive potential, his work reveals a tension between the visible, the content (of a remarkable clarity and compositional skill) and the invisible: the thoughts and concerns that arise in his images.

Nicholas Nixon’s serial work explores distinctive worlds with a notable emphasis on social concerns, thus revealing unexpected aspects of reality that pertain to the artist’s private experience but which due to their accessible, everyday nature the viewer can also share, hence their ability to easily arouse the echo of memories and emotions in us. Slowness, long periods of time and an absence of dramatic episodes define a work that unfolds over almost five decades of constant dedication. Nixon employs a simple, almost obsolete but impeccable technique, using large-format cameras that bring out the proximity and cooperation of the sitters in order to show the near-at-hand worlds on which he focuses his attention: the elderly, people with illnesses, the intimacy of couples and the family.

Spanning the years 1974 to 2017 and featuring more than 200 photographs, this is the largest retrospective of Nicholas Nixon’s work to date. Its chronological ordering reveals a clear guiding thread, a personal world without limits and a remarkable ability to reinvent itself. The viewer thus moves from the cold views of New York and Boston of the 1970s, which were included in New Topographics, one of the most important photography exhibitions of the 20th century, to the series “The Brown Sisters,” which is undoubtedly one of the most perceptive of all photographic reflections on the passing of time and which has been created over the entire course of Nixon’s career.

Based on a chronological ordering and grouped into the principal series created by the artist, this extensive survey also constitutes a self-portrait of Nicholas Nixon, who through his work reveals the certainty of knowing what is fundamental, worthwhile and real in our lives.