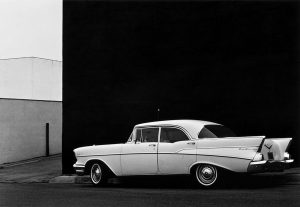 Lewis Baltz (Newport Beach, California, 1945 – Paris, 2014) is one of the most important photographers of the second half of the 20th century. Traditionally, his work has been associated with the generation of photographers that came together for the New Topographics exhibition, which questioned the concept of the landscape as beautiful, existential and almost sacred, and showed it as it really was, as a result of the almost always unfortunate intervention of mankind.

Baltz viewed the landscape as an urbanized, structured and populated space, and portrayed these constructions as being muted and virtually faceless. For him, natural scenery had become landscape as real estate, where the countryside and the city were worth exactly the same in monetary terms and, just like a surveyor, he measured it step by step and recorded it in his pictures.

Photography was the mechanism Baltz used as a means of expression, as a tool for research and knowledge, very much in line with the philosophical and artistic thinking of the sixties and seventies. Because of this, formally, Baltz operated as a professional of direct photography but, in terms of content, he was an artist who thought conceptually and his education was shaped by the artistic concepts prevalent at the time.

Using around 400 exhibits, the show presents and discusses the entire range of Lewis Baltz’s work, from his first photographic series in black and white taken in the 60s and 70s such as The Prototypes Works, The Tract Houses and The New Industrial Parks near Irvine, California, up to the work in color and the exploration of new artistic languages of his later years like Ronde de Nuit, The Deaths in Newport and Venezia Marghera.