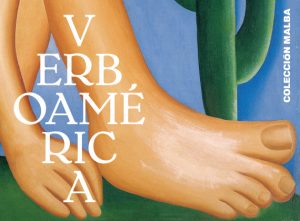 In the framework of the celebration of the 15th anniversary of MALBA’s founding, the museum presents Verboamérica, a new exhibition of its permanent collection.The exhibition—the fruit of a wider research project that has been underway for over two years—proposes a living history of Latin America in actions and experiences, a postcolonial history that does not understand Latin American art in the terms proposed by European art, but rather on the basis of the words that the artists themselves used in devising their aesthetic agendas.

“Verboamérica is performative and temporal; it evidences the crisis of a single and linear notion of historical time that globalization has witnessed,” explains Pérez Rubio in the exhibition catalogue; a cornerstone of the publication is Joaquín Torres-García’s famous map América invertida [Inverted America], a work that, as early as 1936, posited a modification in the geographic and spatial, but also temporal, pre-eminence of the Americas.

The exhibition breaks with a classical chronological overview. It includes 170 pieces divided into eight thematic clusters with works from different historical periods and in an array of formats (painting, drawing, photography, video, book, historical document, and installation). The clusters are: I. In the Beginning; II. Maps, Geopolitics, and Power; III. City, Modernity, and Abstraction; IV. Lettered City, Violent City, Imagined City; V. Work, Crowd, and Resistance; VI. The Country and The Outskirts; VII. Bodies, Affects, and Emancipation; and VIII. Indigenous America, Black America.

MALBA’s founding collection, which was donated by Eduardo F. Costantini in 2001, consisted of 223 works. It now encompasses a total of 590, and it continues to grow every year thanks to donations and to the Acquisitions Program, which gained impetus in 2012 pursuant to the creation of the Acquisitions Committee. The curators envision Verboamérica in relation to a curatorial discourse that resonates with the museum’s public programs during recent years. One of its premises was that the region’s cultural diversity be reflected in a large number of works by artists of different nationalities and more equitable gender representation. Verboamérica features a larger number of women artists and more works in disciplines and techniques like video, historical documentation, and artists’ books.

The exhibition is curated by historian and researcher Andrea Giunta and by the museum’s artistic director, Agustín Pérez Rubio.