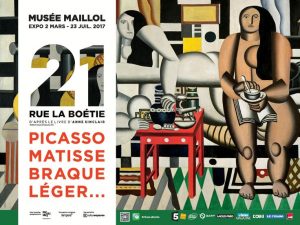 The exhibition “21 Rue La Boétie” retraces the remarkable story of Paul Rosenberg (1881-1959), one of the most in uential art dealers in the first half of the twentieth century. The exhibition brings together some sixty or so Modern masterpieces, some of which have never before been shown in France (works by Pablo Picasso, Fernand Léger, Georges Braque, Henri Matisse, Marie Laurencin, etc.), coming from some of the largest public and private art collections in Europe. Many of the artworks on display have a direct connection to the dealer, having been shown in his galleries in Paris or New York, while others provide a signi cant insight into the historical and artistic context of the time.

Created by Tempora and produced by Culturespaces, in collaboration with experts at the Centre Pompidou, this exhibition benefits from the support of Paul Rosenberg’s granddaughter, Anne Sinclair, author of 21 Rue La Boétie (published by Editions Grasset & Fasquelle in 2012).

The career of Paul Rosenberg, an avid art collector, astute businessman and discerning amateur, friend and agent to some of the biggest artists of his day, allows us to understand from a new perspective the dual turning point that saw the emergence of Modern art, and the shift of the international art scene from Paris to New York against the backdrop of the Second World War.

Combining history and art, social history and politics, the exhibition highlights a crucial time in the twentieth century, of which Paul Rosenberg was an important witness, both an actor and a victim.

The hosting of the exhibition “21 Rue La Boétie” by the Musée Maillol is part of their new cultural programme, developed by Culturespaces, focusing on Modern and Contemporary art. This exhibition was previously shown at the Musée de La Boverie de Liège, designed and produced by the Belgian cultural agency Tempora and co- curated by Elie Barnavi, Isabelle Benoit, Vincent Delvaux, François Henrard and Benoît Remiche.