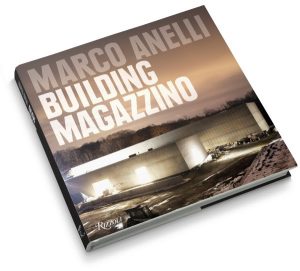 The three-year photographic portfolio by Italian photographer Marco Anelli, commissioned by Magazzino founders Nancy Olnick and Giorgio Spanu, was published by Skira Rizzoli in 2017 and designed by Waterhouse Cifuentes Design. the book illustrates Anelli’s portfolio documenting the construction of Magazzino, an art warehouse in Cold Spring, New York conceived by Spanish architect Miguel Quismondo. The balanced beauty of Anelli’s photographs captures the passing of time and the fleeting feeling of impermanence with a distinguished calmness and serenity. The book features essays by Manuel Blanco, Alberto Campo Baeza and Marvin Heiferman.

Coinciding with the book signing, Magazzino presents an exhibition in the Program Room of the library. Curated by Magazzino’s Director, Vittorio Calabrese, the exhibition features large-format photographs depicting the different phases of construction alongside portraits of the local workers involved in the project.About Marco Anelli

Marco Anelli is a Roman-born, New York-based photographer. After specializing in black and white photography and printing techniques in Paris, he started working on photographic projects that evolve over long periods of time. His publications include works on sculpture and architecture, sport and classical music. In 2010 he took portraits of 1,545 participants in Marina Abramović’s performance at the MoMA (Portraits in the Presence of Marina Abramović, Damiani Publisher 2010). Since 2011 he has been exploring the character of the artist and their work as expressed in their studio. Something Wicked This Way Comes is a project that leads the viewer into the creative process of internationally acclaimed artists. In 2015 he completed A Simple Story, his project on the construction of the new Whitney Museum of American Art. New York’s architecture, building sites and their workers are the subjects of his most recent research. He lives and works in New York City.www.marcoanelli.com