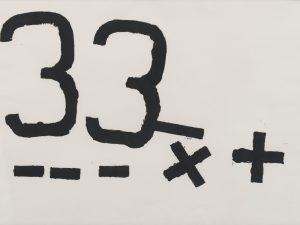 Premiering August 28, Magazzino Italian Art Foundation and the Samuel Dorsky Museum in New Paltz will present Paper Media: Boetti, Calzolari, Kounellis. The first exhibition in the United States to focus on works on paper from the Arte Povera period, the exhibition will feature a selection of rarely-seen works by Arte Povera artists Alighiero Boetti, Pier Paolo Calzolari, and Jannis Kounellis curated by Scholar-in-Residence Francesco Guzzetti. An opening reception will take place on September 7 from 5-7pm.

Convening the work of three masters: Alighiero Boetti, Pier Paolo Calzolari, and Jannis Kounellis, selected from the Olnick Spanu Collection, the exhibition will consider the significance of drawing and print within each artist’s practice, as well as in Italian art and culture in the 1960s and 1970s more broadly. Curated by Magazzino’s inaugural Scholar-in-Residence, Francesco Guzzetti, the exhibition represents the culmination of his research on the drawing practices of Arte Povera artists, as well as the provenance of the works in the Olnick Spanu Collection. An illustrated catalog will accompany the exhibition, focusing on this under-explored area of works on paper from the Arte Povera period and detailing the history of each work on view.

“We are so thrilled to collaborate with the Dorsky Museum to present this exhibition to both the SUNY New Paltz and Hudson Valley communities,” states Vittorio Calabrese, Director of Magazzino Italian Art Foundation. “A core mission of Magazzino since our founding has been to share Italian art and engage with the dynamic art world in this region. We could not be happier to work with the Dorsky Museum to exhibit these rare works, which share an intimate perspective into the greater practice of Arte Povera masters Boetti, Calzolari, and Kounellis.”

Paper Media: Boetti, Calzolari, Kounellis brings together eleven rarely seen works on paper from the Olnick Spanu Collection. As with many of the artists associated with Arte Povera, working with various drawing and printing techniques was fundamental to the practices of Boetti, Calzolari, and Kounellis. In a new development for the period, these artists regarded their works on paper as finished pieces rather than preparatory steps to create an artwork. From Calzolari’s alchemical experimentation with unconventional materials such as rose petals and salt, to Kounellis’ iteration of a new alphabet of signs and images, works on view will speak to the artists’ embrace of formal and material experimentation and intensive questioning of what it meant to be an artist.

Francesco Guzzetti holds a doctoral degree in History of Modern and Contemporary Art from the Scuola Normale Superiore in Pisa. Most recently, Guzzetti was the Lauro De Bosis postdoctoral fellow at the department of Visual and Environmental Studies at Harvard University in 2018. His residency and research at Magazzino have laid the groundwork for further investigation into the multifaceted media practices of Italian artists in the 1960s and 1970s, which he has conducted since his doctoral studies and is presenting in several current and upcoming publications.

Since his appointment as the inaugural Scholar-in-Residence at Magazzino, Francesco Guzzetti has been exploring the intricacies of works on paper and the significance this mode of material exploration had on artists affiliated with Arte Povera. The exhibition at the Dorsky Museum represents the culmination of his research on the drawing practices of Arte Povera artists as well as on the exhibition history and provenance of the works in the Olnick Spanu Collection.

About The Dorsky Museum
Through its collections, exhibitions and public programs, the Samuel Dorsky Museum of Art supports and enriches the academic programs at the College and serves as a center for Hudson Valley arts and culture. With more than 9,000 square feet of exhibition space distributed over six galleries, The Dorsky Museum is one of the largest museums in the SUNY system. Since its official dedication in 2001, The Dorsky has presented more than 100 exhibitions, including commissions, collection-based projects, and in-depth studies of contemporary artists including Robert Morris, Alice Neel, Judy Pfaff, Carolee Schneemann, and Ushio Shinohara.

Paper Media: Boetti, Calzolari, Kounellis will be on view from Aug. 28 – Dec. 8 2019, in the Dorsky’s Sarah Bedrick Gallery.

The Samuel Dorsky Museum of Art