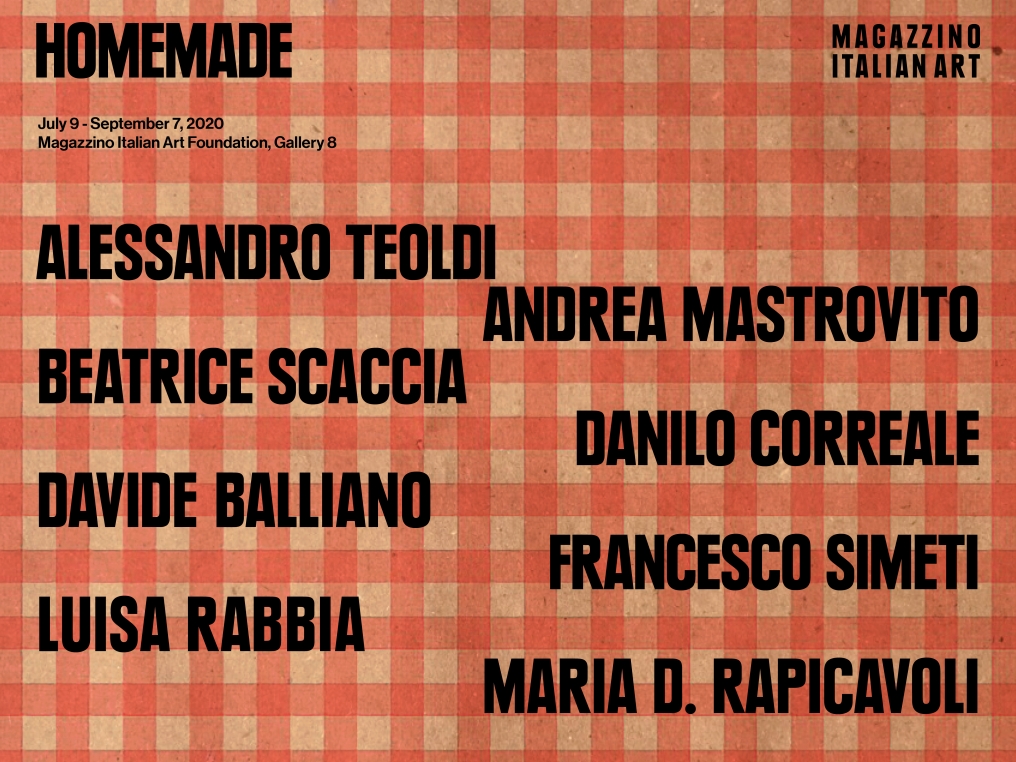 Curated by Director Vittorio Calabrese with Chiara Mannarino, the approximately 30 works on view demonstrate how participating artists pushed their practice during this period, using new methods and materials, and interrogating new issues—from concrete casts that explore polarized concepts, such as connection and separation, to large-scale painting that investigates cosmic natures. The exhibition presents these works alongside a selection of previous projects by the artists to shed light on their broader creative practices. Taken together, Homemade serves as a testament to the power and resilience of art and its ability to connect us all.

Marking the first exhibition of contemporary art to be mounted on-site at Magazzino in the museum’s history, Homemade, will open to the public on July 10 and will be on view in Gallery 8, which will continue to serve as the museum’s dedicated special exhibition space for future projects.

More information on Homemade and each artist’s project is available here.

Alessandro Teoldi created a studio in his living room, where he devised a method of creating concrete casts from paper collages that was completely new to his existing practice. Throughout Homemade, Teoldi explored polarized concepts: destruction and creation, connection and separation. The artist memorialized tender gestures and intimate moments of touch by casting them in rigid, structured concrete. The protocols for this process recalled domestic activities, like cooking, and simultaneously harkened to the artist’s formal training in photography. Each impression in the concrete is unique, as each resembles a weathered object upon completion, and meditates on the touch and interpersonal closeness that is not possible in light of the quarantine.

Andrea Mastrovito created a to-scale family portrait of his wife, child, and self with paper collage. Each portrait is composed of an intricate web of visual components, created through frottages of objects that fill his home. Mastrovito carefully selected the items he used to compose these portraits, choosing items that represent both physical and emotional aspects of his family members. For instance, his son’s portrait is composed of the toys he plays with regularly, and his wife (the family breadwinner) is made up of coins. For his own portrait, Mastrovito composed his body with frottages of Queen’s album The Miracle, a grid of VHS tapes, and an art book on Picasso’s Blue and Rose periods. Created as the artist prepared to return to Bergamo, his process became a way to reflect and memorialize his family’s New York home and their experience of lockdown within it.

Beatrice Scaccia‘s 3-minute film shares an intimate look into the artist’s creative process. Before this project, Scaccia typically worked in two-dimensional mediums, amalgamating painting, drawing, and writing to construct multidimensional narratives that follow identity-fluid protagonists through ambiguously defined worlds. For Homemade, she endeavored into sculpture to create a stop motion animation video that explored the compulsion to hoard objects during this moment of global crisis. All around the world, people have purchased and accumulated goods and products in mass quantities deemed necessary to survive the virus—from hand sanitizer and toilet paper to pasta, flour, and frozen goods—leaving store shelves empty. Using only materials Scaccia herself stored in her apartment, she patiently built an environment around a sculptural bust, the protagonist of her film. Paired with footage captured of unused objects in her neighborhood and images of nature, Scaccia explored the evidence of hoarding around her. The video calls attention to the tragedy of waste and highlights that, while objects may provide a semblance of comfort and protection, nature will always reign supreme.

Danilo Correale, compelled by quarantine in an unexpected location, meditated on concepts familiar to his practice, such as the notion of (un)productivity, through a more personal lens. Creating lengthy and ongoing lists of his artistic projects and endeavors—realized, unrealized, yet to be conceptualized, or still in progress—Correale looks inward as a means of both charting and reflecting upon his past, present, and future. Compiled in fragments, the final work comprises an exercise in mapping and finding connections between the artist’s interests, forming a sort of index of ideas that have occupied him during this period. Created through a labor-intensive and nearly performative process of hand-reproducing typographic characters, Correale used his body to inform the scale.

For Davide Balliano, using color was a threshold he was hesitant to conceptually cross. The tension between sculpture and painting, as well as three and two dimensionality, has been his central area of exploration. Finding balance between colors represented a too precarious set of relationships. Now, after delving headfirst into creating expressionistic, ambling, and colorful paintings on paper, Balliano has embraced the unknown and has come to understand his own practice with new clarity. Resulting from a confirmation bias, Balliano is now working on a large-scale painting in white, the amalgamation of all colors, with new clarity. Balliano states, “The future remains unpredictable, color stands its ground, white contains it all.”

Francesco Simeti considers his final series of animations “seedlings;” they leave room for both the artist and audience to envision new futures and take new perspectives. For Homemade, the artist started the project with an interest in how, with the absence of humans, animals and plants began to reclaim spaces. Swans and fish re-inhabited canals in Venice again; coyotes took to the streets of San Francisco; spring flowers bloomed all over. All the while, humans have retreated indoors and become more dependent on technology to connect to the external world. Using hand-drawn and found images of plants and new video production technology, Simeti’s video, set to a new score created in collaboration with composer Chris Cerrone, depicts the expansion of diverse plant life and moments of uncanny overlap, with plants palimpsest over another, creating mysterious and unfolding compositions.

Luisa Rabbia began this project working on an intimate scale, but in the end, she created a large-scale painting that suits her exploration of cosmic nature. Rabbia’s work profoundly investigates human connection, looking beyond superficial means of being in touch with one another. As the project closes, and New Yorkers remain physically separated from loved ones and friends, the sentiment of expressing solidarity in our solitude rings clearly and symphonically in her final work. Rabbia’s large-scale painting Chorus shows overlapped silhouetted figures that radiate lustrous yellows from the areas where they intersect. Rabbia strategically strips away coats of paint from the surface as she works, a process that mirrors our need to metaphorically remove the layers that obscure our deepest forms of relation in order to return to them. In this painting, Rabbia meditates on the belly button: a body part shared by all humans and a continual reminder of both our connection to past and future generations, and of the time it takes to create them.

Maria D. Rapicavoli, in her first week of shelter-in-place, came across a shattered storefront; the piles of the blue-green window glass entranced her, as they were evidence of an unfamiliar neighborhood drama and human interaction. She tried to save the remnants to be repurposed for her Homemade project, but abandoned them for fear of bringing a foreign contaminant inside. However, once indoors, she broke several wine glasses; each accident reminded her of the broken window. She staged photographs with these new shards of glass and continued to write her reflections down. In the final weeks of Homemade, Rapicavoli returned to the broken storefront and recreated the thousands of glass shards that she encountered there out of porcelain. Her rigorous and time-consuming process allowed her to meditate on her own experience of having to reconstruct and reimagine her current reality in this unprecedented moment. Through hours of meticulous molding and modeling of individual clay pieces that occupied every inch of her apartment, Rapicavoli returned to where her project first began, indicating that, as Gabriel García Márquez notes in One Hundred Years of Solitude, time does not pass; rather, it turns in a circle.