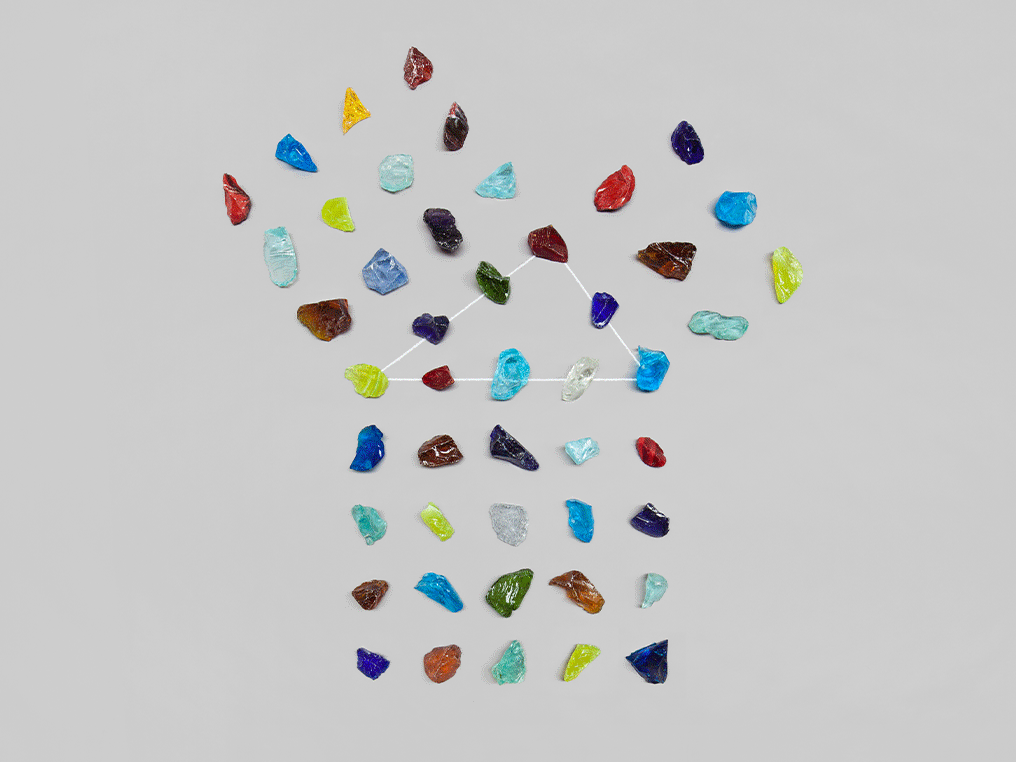 This fall, Magazzino Italian Art opens a special exhibition examining the formal, conceptual, and procedural affinities in the work of Mel Bochner, Alighiero Boetti, and Lucio Fontana. Curated by Bochner in collaboration with Magazzino, the exhibition marks the first presentation to consider the American artist’s extensive, yet overlooked, engagement with the practices of Fontana and Boetti, as well as with Italian art at large. Bochner Boetti Fontana offers, through the artist’s perspective, a number of resonances between his work and that of the Italian and Italian-Argentine artists: an exploration of systems, language, and materials; and a sense of irony and humor, often and especially shared by Arte Povera and Conceptualism, as all these works opened the work of art onto the space of display. The exhibition also traces parallels between the artistic movements that developed on both sides of the Atlantic during the 1960s and 1970s: Spatialism and Arte Povera in Italy, and Process and Conceptual art in the United States.

On view October 2, 2020 through January 11, 2021, Bochner Boetti Fontana features paintings, sculptures, and installations, including works from Bochner’s personal archive, as well as major international loans. The exhibition is presented with the support of the Archivio Alighiero Boetti and Fondazione Lucio Fontana, and is accompanied by a catalog, featuring contributions from Bochner and Magazzino’s 2019-20 Scholar-in-Residence Tenley Bick, who is also Assistant Professor of Global Contemporary Art at Florida State University.

Bochner and Bick will connect for a conversation to be presented digitally over Magazzino da Casa, the museum’s online platform for digital content. The two will discuss Bochner’s practice from the 1960s to the present, with a focus on his long-term interest in the work of postwar Italian art, transatlantic resonances in art of the 1960s, and the impact of his personal experiences in Italy throughout the decades. Details on how to access this conversation will be released later.

“We are incredibly honored to be working with Mel Bochner to curate this special exhibition that explores key tenets of his practice in tandem with those of Alighiero Boetti and Lucio Fontana,” said Magazzino Director Vittorio Calabrese. “The exhibition marks the first time that an American artist will be shown in our galleries and speaks to the central theme of our 2020 season, which reveals the international resonances of postwar and contemporary Italian art within a broader global perspective.”

One of the most celebrated figures in Conceptual art, Bochner was initially best received in Italy, where he has spent significant time across his career. He had an early solo exhibition at the Galleria Gian Enzo Sperone in Turin in 1970, an important gallery for Arte Povera, and was included in Germano Celant’s now canonical exhibition Conceptual Art, Arte Povera, Land Art of the same year.

Bochner Boetti Fontana highlights connections between the practices of the three artists, including the similar uses of systems, language, and materials by Bochner and Boetti, and the innovative approach to artwork and exhibition space by all three. Works by Bochner in the exhibition register the artist’s long-term, but understudied, engagement with Boetti and Fontana and with Italian art, history, and culture broadly, including:

Highlight works by artists Alighiero Boetti and Lucio Fontana on view include:

Mel Bochner is recognized as one of the leading figures in the development of Conceptual art in New York in the 1960s and 1970s. Emerging at a time when painting was increasingly discussed as outmoded, Bochner became part of a new generation of artists, which also included Eva Hesse, Donald Judd, and Robert Smithson—artists who, like Bochner, were looking at ways of breaking with Abstract Expressionism and traditional compositional devices. His pioneering introduction of the use of language in the visual led Harvard University art historian Benjamin Buchloh to describe his 1966 Working Drawings as “probably the first truly conceptual exhibition.”

Bochner came of age during the second half of the 1960s, a moment of radical change both in society at large, as well as in art. While painting slowly lost its preeminent position in modern art, language moved from talking about art to becoming part of art itself. Bochner has consistently probed the conventions of both painting and of language, the way we construct and understand them, and the way they relate to one another to make us more attentive to the unspoken codes that underpin our engagement with the world.

Bochner received his BFA and an honorary Doctorate in Fine Arts from Carnegie Mellon University in Pittsburgh. He lives and works in New York.

A key figure of Arte Povera, Boetti began his decades-long practice in Turin with his solo exhibition debut in 1967 at the Galleria Christian Stein. Working as Alighiero e Boetti (Alighiero and Boetti) since 1971, Boetti explored dual authorship, game play, systems, and language in his practice. Using a variety of materials and techniques, including ballpoint pens, flags, postal stamps, and textiles, Boetti broke from power structures and conventional artistic methods, employing modes of production that existed outside the formal fine arts. Boetti had a deep interest in authorship and artistic production.

In 1972, Boetti moved to Rome, where he continued to live and work until his death in 1994, though he often traveled. His travels had a significant impact on his work, resulting in the Mappa series of the 1970s and his longstanding collaborations with women in Afghanistan and Pakistan on his embroidered works. The collaboration led to the creation of the artist’s most famous series, which he would develop throughout all his life, such as Mappe, Arazzi, and Tutto. These works, like other major series, developed since the 1970s (such as Biros, the works made with ballpoint pen), and were all based on binary oppositions of concepts of order and disorder, individual and society, rules and variations, and nature and artifice.

A major retrospective dedicated to his work, Game Plan, was held in 2011 and 2012 at the Museum of Modern Art in New York, the Tate Modern in London, and the Reina Sofia in Madrid. In addition to his inclusion in major Italian institutions, his works are in the collections of major institutions around the world, including the Whitechapel Gallery, London (1999); Museum für Moderne Kunst, Frankfurt (1997); Galleria Nazionale d’Arte Moderna, Rome (1996); La Biennale di Venezia (1995); Museum of Contemporary Art, Los Angeles (1994); Kunsthalle Basel (1978); Centre d’Art Contemporain, Geneva (1977); and Centre Georges Pompidou, Paris (1989).

Sculptor, painter, and theorist Lucio Fontana is internationally renowned as one of the most innovative artists of the 20th century. Fontana’s rupture of the surface of painting has had a widespread impact on generations of artists in exploring the dynamics of how painting can incorporate space and the real, physical elements of life.

Born into an Italian family in Rosario, Santa Fe, Argentina, Fontana began his artistic career as a sculptor, experimenting with ‘abstract’ sculptures during the 1930s, becoming one of the key figures of the non-figurative avant-garde in Europe as he split his time between Italy and Argentina. During the 1940s, Fontana founded the Academia Altamira in Argentina, which led to the creation of the Manifiesto Blanco in 1946. Following the war in 1947, Fontana returned to Italy permanently and subsequently formed Spatialism, a movement that focuses on the physical and spatial qualities of sculpture and painting with a particular interest in the way light, space, and movement can create art. Fontana also punctured the canvas with buchi (holes), titled them Concetti spaziali, and cut slashes into his monochrome-painted canvas, which led the artist to create the Concetti spaziali, Attesa or Attese.