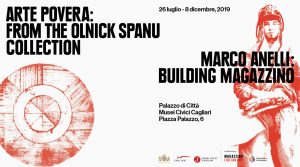 For the first time, Magazzino Italian Art Foundation works together in partnership with an Italian museum to present exhibitions in the spaces of Palazzo di Città of the Musei Civici di Cagliari which will be on view until December 8th, 2019.

The American institution is represented through fifteen carefully selected works by the main Arte Povera artists from the Olnick Spanu Collection, considered one of the largest and most complete collections of Arte Povera in the world. The story is enriched by the telling of the construction of Magazzino Italian Art Foundation through the photographs of Marco Anelli, presented for the first time in Italy with a series of unpublished works following exhibitions in New York and Washington D.C.

The two exhibitions together define the making of the great cultural project of Magazzino Italian Art Foundation – located one hour from New York City. Magazzino Italian Art Foundation is devoted to presenting Italian Postwar and Contemporary Art, with a strong focus on the Arte Povera group, an explosive moment of artistic creativity recognized among the main movements of the national art of the second half of the 20th century in the United States, more specifically in the Hudson Valley, an area historically representative of American art and culture. The main creators of the project and co-founders of Magazzino Italian Art Foundation are Nancy Olnick and Giorgio Spanu, born in New York and Sardinia respectively, who have been collectors of Contemporary Art for years.

The masterpieces from the Olnick Spanu Collection come to Sardinia for the first time, many of them directly from the United States, to recount with completeness, synthesis and clarity the disruptive strength and the totalizing character of a group of artists that under the leadership of Germano Celant, represented the last Italian artistic avant-garde movement of the last century. The movement was born in the 60s in the main centers of Italian cultural production until it was recognized internationally, where it is still represented in the most important contemporary art institutions in the world.

Twenty-seven photographs form the exhibition of Marco Anelli, a Roman-born New York based photographer. The works on display are part of a large body of work published entirely in the book Marco Anelli: Building Magazzino (Skira Rizzoli, 2017). The selection of large-format prints includes 12 portraits of the workers who participated in the construction of Magazzino Italian Art and a series of 15 photographs depicting the different phases of the construction of the building.

Anelli did not just want to document the construction of Magazzino Italian Art, but to testify to the humanity, emotions and experiences of those who made this project a reality, making it, from every point of view, a work of art in itself. As a result of his inclusive approach, the photographer’s intimate vision unfolds in time, proposing a constant dialogue between architecture, landscape and the workers, a story connected with the thread of art, in the name of which the project comes to life and becomes an art project in its own right.

Marco Anelli is a Roman-born, New York-based photographer. After specializing in black and white photography and printing techniques in Paris, he started working on photographic projects that evolve over long periods of time. His publications include works on sculpture, architecture, sports, and classical music.

In 2010 Anelli took portraits of 1,545 participants in Marina Abramović’s performance at the MoMA in New York City (Portraits in the Presence of Marina Abramović, Damiani Publisher 2010). Building sites and their workers are the subjects of his recent research. In 2015 he completed A Simple Story, his project on the construction of the new Whitney Museum of American Art; and in 2017 he released Building Magazzino, which documents the construction of Magazzino Italian Art in Cold Spring, NY.

Since 2011 Anelli has been exploring the character of the artist and their work spaces. Artist Studios in New York, which will be published by Damiani in the spring of 2020, is a project that leads the viewer into the creative process of internationally acclaimed artists.

From the early 1900s to the contemporary, from Sardinian to Siamese art, Cagliari’s Civic Museums preserve and display to the public the civic collections, gathered from the early years of the last century, in three distinct branches of the Municipal Art Gallery. The first civic museum of Sardinia was inaugurated in 1933 and dedicated to the art of the 20th century; its extension CArteC – cave for contemporary art, is dedicated to experimental site-specific projects; the Siamese Art Museum, which boasts Stefano Cardu’s precious and unique collection of Oriental Art from South East Asia, opened to the public in 1918; and Palazzo di Città, an exhibition space dedicated to temporary exhibitions.

These three locations, in the historic center of Cagliari, sites of extraordinary historical, architectural and landscape value, make the Civic Museums today a center of production and cultural dissemination, and a point of attraction for the city and tourists at the same time.

Designed by Spanish architect Miguel Quismondo, the 20,000 square-foot structure was completed in June 2017. Magazzino serves as a resource for scholars and students and offers an extensive library and archive of Italian Art. In addition, Magazzino has become a cultural hub for the vibrant Hudson Valley community thanks to the joint programs with local organizations.

Under the guidance of Director Vittorio Calabrese, his team and its curatorial programs, Magazzino Italian Art bridges collaborations with American and Italian institutions not only to support contemporary Italian artists but also to foster discussions on Italian Postwar and Contemporary Art in the United States.