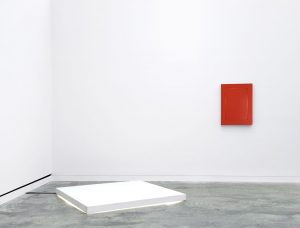 This exhibition represents the Olnick Spanu Collection’s core of Post-war Italian art, allowing the space to be an environment solely devoted to this generation of Italian artists.

Their work came at a defining moment in the 1960s, as Italy was transitioning into an era of burgeoning industrialization, student rebellion, and a decline of the “economic miracle” of the 1950s allowed by the Marshall Plan. The artists aimed to eradicate the boundaries between media as well as between nature and art, their mantra was “Art is Life.”

The term Arte Povera, coined by art critic Germano Celant in 1967 to mean “impoverished art,” grew out of the radical stance artists were taking in response to their dissatisfaction with the values established by political, industrial and cultural institutions in Italy. Following the movement’s inception by Celant, 1968 was a year of seismic social and political change across the globe which percolated into the time’s art scene.

50 years later, Arte Povera: From the Olnick Spanu Collection presents 76 artworks in a variety of formal and conceptual approaches in all mediums – ranging from painting, sculpture, photography, works on paper and installations—in an effort to display the evolution of each artist’s career over time.