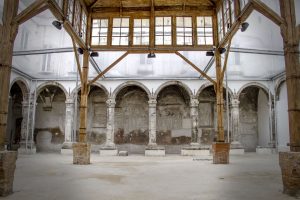 Bodies becoming stories, journey, lives. Immigrants. Men and women that cut through earth and see and crossed borders to start over again in an elsewhere that is not yet home.

To this figures and humanity, Liu Jianhua- one of the most representative Chinese artist of the contemporary art scene – pays homage to with ‘Monumenti’, the site specific exhibition curated by Demetrio Paparoni and realized for Made in Cloister Foundation.

As the creation of communities in consequence of migration, ‘Monumenti’ is the result of an encounter and a  relation between the artist and the popular and multiethnic district of Porta Capuana, in which, during a period of residence in January 2018, Liu Jianhua has interacted with immigrants, that live and influence the culture of the area, and with local artisans of ceramic, papier-mache and porcelain.

This are the foundation of an exhibition that is a contamination itself, as it is the topic that imprint a sign on it: living bodies and  papier-mache statues, video and performance, social and private issues, oriental and local cultures, here find the place to interact giving birth to a dissemination of lives and memories that cross the entire space of the Foundation.

In the center of the cloister, there is a sculpture made in papier-mache representing a mother with his children. All around it, 23 sculptures that symbolize all immigrants that the artist met in Porta Capuana. These life-size statues were realized by the artisan Carlo Nappi, specialized in the traditional lavoration of papier-mache, a tradition that pools China and Campania together.

Underneath the 24 sculptures, there are just as many pedestals entirely covered by ceramic of Vietri tiles, with 92 different shades of colours, made by artisans from the factory Ceramica Francesco De Maio.

Behind the monuments, portraits of the 24 immigrants shot by Riccardo Piccirillo and a video reproducing stories and memories of those men and women, that aren’t just the object of the exhibition, but subject to whom the artist leaves faces and voices through the screen.

On the day of the opening, there was a live performance with the real immigrants on the pedestals instead of statues, underlining, even more, the artist intent of giving life to the monuments. 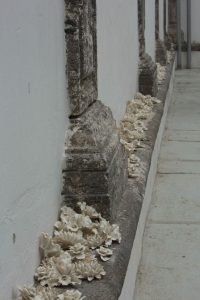 All around the installation, 2000 thousand flowers in Capodimonte white porcelain evocating the fragility of immigrants lives. The prototypes were realized by the artisan Pasquale De Palma and then produced from students and master from the Institute Caselli- De Sanctis, which inherited the artisanal tradition of the Real Fabrica della Porcellana di Capodimonte built in the 19th century by the Borbone’s family.

Inverting the tradition, the monuments aren’t dedicated to public and eminent figures, but to an often aching and subordinate humanity and to his resistance strength and dignity. A complex work that talks about the present, in which knowledge and artisanal tradition converge. A sight that is both politic and deep, that remind us priorities and overturn hierarchies.

“ The encounter with Liu Jianhua was very intense- said Davide de Blasio from Made in Cloister Foundation- and during his first trip to Naples, in January 2018, we immediately shared the need to give voice to a multiethnic community in constant movement that today, as in the past, characterize Porta Capuana area. The harmony was immediately strong from the first time between the Foundation and the artist, he was able to experiment and work in complete freedom and independence, which is an essential condition of the creative process.”