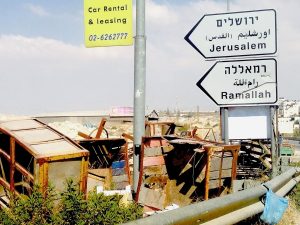 On the occasion of the inauguration of the A.M. Qattan Foundation’s new building, its Public Programme announces the names of artists and collectives partaking in its first exhibition, entitled Subcontracted Nations, which will run from the June 28 until the September 29, 2018. WEGHALEN

The new building is situated in the al-Tireh neighbourhood in Ramallah, a few hundred metres from Nelson Mandela square. Designed by Seville-based architects, Donaire Arquitectos, the building’s dominant feature is a cube of sleek louvres which emits light at night, acting as a metaphor for a lighthouse, thereby underpinning the Foundation’s aspirations for the building to become a beacon of knowledge and science, a haven for cultural exchange, and an incubator for creativity. The 7,730m² building houses a number of public facilities, including a library, a resto-café, a cinema/theatre, an art gallery, a residency space and a multipurpose hall. It is the first building in Palestine to be registered with the Palestinian Higher Green Building Council.

Subcontracted Nations is a group exhibition that questions differing concepts of nation. In these times, we are seeing major transformations in these concepts through rhetorical and political discourse across many corners of the globe.

The exhibition draws its title from the proliferation of the processes of sub-contracting found in our world today―whether it is the sub-contracting of health services, or the privatization of public resources including education. These processes have been instrumental in the fragmentation and compartmentalization of public services and the diminution of the role and obligations of the state.

Another question the exhibition will pose is how the different forms of neo-liberal orders in societies are being kept within socially and economically acceptable limits, in a manner considered optimal for preventing dissent and thus serving to maintain the delusion of social agency. The effects of these neo-liberal mechanisms have become intrinsically entrenched in the production of day-to-day relationships, from family to sexual relations, to the status of citizenship and the structure of politics. This imposition of neo-liberal mechanisms has contributed in numerous ways to the transformation of the individual through reformatory techniques, pre-designed lifestyles, dependency, and so forth.

If states are losing day-by-day control of the conduct, management and performance of vital services such as housing, health and social security, which have become increasingly privatized, how can traditional political structures and democratic processes practically serve as a mechanism for attaining better welfare services? What does citizenship mean within these conditions? What is the relevance of democratic politics, if the political parties eventually aspire to create coalitions and profitable partnerships with multinational corporations? What does the nation mean within this new order? How can we imagine the nation when it is reduced to a series of “sub-contracted” service industries?

If sovereign states are no longer capable of fulfilling their main mandates to protect and improve the conditions of the majority of their citizens as well as alleviate poverty, and if some states are better than others at subsidizing welfare services or controlling the private provision of these services, then can we polemically engage in rethinking the politics of democracy through subcontracting other states to administer our nations and provide better services? How could that reflect on the evolving meanings of a nation and the imagining of future social structures and international relations?