A.M. Qattan Foundation: “We Shall Be Monsters” 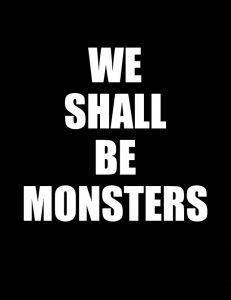 The Young Artist of the Year Award (YAYA) is a biennial programme organized by the A.M. Qattan Foundation to encourage, support, and promote young Palestinian artists. The Award has been named the Hassan Hourani Award in honour of the late Hassan Hourani, a gifted young artist and one of the winners of the first Award in 2000, who died in a tragic drowning accident in 2003.

We Shall Be Monsters is the exhibition curated by artist Emily Jacir, the mentor of the shortlisted young artists for this 10th anniversary edition of the YAYA. The locus of the exhibition is derived from the artistic practices of the participants, whose works were developed over a period of ten months in close collaboration with the curator. Participating artists are Leila Abdelrazaq, Alaa Abu Asad, Yusef Audeh, Haitham Haddad, Safaa Khateeb, Dina Mimi, Firas Shehadeh, Dima Srouji, Walid Al Wawi, and Ola Zaitoun.

In these artists’ works, the personal and collective are deeply intertwined—as in Ola Zaitoun’s psychologically charged paintings depicting the disfigured bodies of women, or the dismembered braids of hair presented as evidence of resistance in Safaa Khateeb’s photographs. In Haitham Haddad’s work, the buried, stitched body becomes a document serving as a time capsule and message to the future. Trans-generational transmissions, memory, and challenging how we collectively and individually construct our history, are also prevalent in the works of the other artists. Drones pass through Firas Shehadeh’s video, where the eye of a wanderer constantly negotiates different proximities from the border zones. Dina Mimi investigates the gaze of the skulls of Algerian resistance fighters that were violently removed from their bodies and kept in a museum in Paris. Leila Abdelrazaq’s animated comic collapses time through narrating the personal tragedy of a stillborn baby to question collective memory, loss, and survival. Other artists explore the possibilities of an empowered critical cartography. Dima Srouji collapses space and time and reveals a personal record of Jerusalem through bodily excavations beneath the surface of the city. Yusef Audeh’s objects and paintings follow an anonymous sexualized male body in the traverse between economy and cryptocurrency. A deer and a blue heron poetically narrate physical movement through spaces and a slow movement across time in Alaa Abu Asad’s video. Meanwhile, Walid Al Wawi challenges the status quo through the parallel metaphor of a parachute’s objective as a mechanism to slow down the fall of a human body.

The jury committee (Sandi Hilal, Declan Long, Eva Scharrer, Ahlam Shibli, and Jorge Tacla) announced Safaa Khateeb as the winner of the 2018 prize in the awards ceremony in Ramallah on Friday, November 9. Safaa’s work, The Braids Rebellion, as the jury stated, “was commended for both its technical and conceptual sophistication. It is exceptional, striking work, employing the unusual practice of scan photography in a rigorous and challenging manner. Principally, however, it was Safaa’s profound and affecting achievement in creating an oblique form of aesthetic and political representation that impressed the jury. By picturing braids of hair donated to a breast cancer campaign by incarcerated Palestinian women (in February 2017), Safaa focused on an act of human generosity and a form of solidarity between prison life and the outside world. The resulting photographic installation has a concentrated, pared-back aesthetic intensity that is nonetheless powerful in its evocation of resistance and empowerment.”

The Second Prize was jointly awarded between Firas Shehadeh and Dima Srouji, who both responded to aspects of Palestinian reality in varying ways and from significantly different positions. Ola Zaitoun was awarded the Third Prize for her work Necrosis.

We Shall Be Monsters exhibition continues until December 27, 2018, daily except Fridays and Sundays, from 11am until 6pm at the A. M. Qattan Foundation Cultural Centre, Al-Tireh, Ramallah, Palestine.