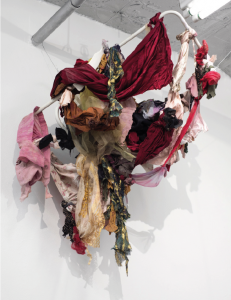 The exhibition Her bed surrounded by machines by Women’s History Museum is presented at schwarzescafé, a cross between a café, exhibition and event space, designed by artist Heimo Zobernig. Like Zobernig’s schwarzescafé, Women’s History Museum respond to the signifiers of the institutional exhibition system. It is not a conventional museum but a collaboration between Amanda McGowan and Mattie Rivkah, which started in 2014 and embraces works by many other artists and friends.
Women’s History Museum deploy museum-style forms of presentation such as vitrines, archival drawers, plinths and other showcases. Their work consists of clothing, jewellery, prints and sculptures, all brought together from a number of diverse sources. Even as they subvert the conventional norms of the museum, they also respond to the prevailing systems of the fashion industry. The clothes on display are wild collages of found garments. These are presented in a way that not only recalls curated displays of fashion collections in museums but also evokes potential backstage situations in catwalk shows, combining disparate values and consumer systems. In much the same way as the shift by which schwarzescafé transforms the ‘White Cube’ into a Black Box, Women’s History Museum reinterpret the established characteristics of the museum and the fashion industry and collaboratively activate them.Women’s History Museum appropriate various aspects of music, museology, fashion and the aesthetics of everyday life, combining all of these aspects into new and different permutations. As part of the exhibition, they have organised a programme of performances and concerts including Kiki Hunt and Riichpsycho.

You were created to be so young (self-harm and exercise)
You were created to be so young (self-harm and exercise) is the first institutional solo exhibition by Ser Serpas. Serpas is an artist and poet from Los Angeles, who is currently based in New York. She draws on her former roles within the spheres of community work and fashion to inform her interactions with hoarded detritus. Her art directly connects with the legacy of the ‘readymade’, which she subverts with something akin to manic ‘hoarding’. Her wild sculptural assemblages are the outcome of a haphazard, unorthodox craft and her combined found objects have a bold, almost figurative air: white goods dumped in the streets and items from demolished buildings mingle with the fragile textiles that she collects in her everyday practice.

In that sense, Serpas’ work is divided into two material realities: the domestic and the urban. Acting as domestic signifiers, endless collections of textiles, garments, and fashion items are messily piled and tied together, whereby they appear as abstract forms. They look like an endless shuffle-sequence of possible styles or like the infinite possibilities of subjective expression. In stark contrast, found objects from the urban realm expose the city’s waste: windows, doors, insulation materials, wall fragments, and bathtubs. Highly generic objects collide with clothes permeated with the notion of the individual.

Far from indulging in mannerist mimicry, Serpas’ objects appear anthropomorphic: a mattress, bluntly crammed into a stove, recalls a tongue coming out of a mouth. At Luma Westbau, Serpas connects both the urban and the domestic: a large tarp of garments creates an architectural sculpture using the Westbau façade, while new sculptures are produced on site with materials and objects found in Zurich.

A book of Serpas’ poetry is published on the occasion of her exhibition, which includes two newly commissioned essays by Hannah Black and Tess Edmondson.

have you considered deletion?

Have you considered deletion? is the first institutional exhibition by Lena Tutunjian.
For the exhibition at Luma Westbau, the artist will re-make her most recent show called she_stays_underground_western_life.