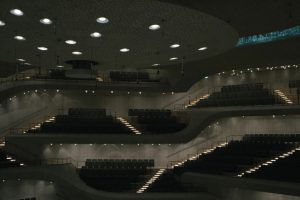 Sarah Morris’ recent film Finite and Infinite Games casts German theorist, writer and filmmaker Alexander Kluge in a philosophical conflict and performance juxtaposed to the empty and not yet opened Elbphilharmonie in Hamburg.

Morris sees this space as a »void«. She used the concert hall in juxtaposition with a reading and dialogue between Alexander Kluge and herself on James P. Carse’s book »Finite and Infinite Games«, published in 1986. The seminal text lays out two opposing world-views of structuring activity, politics, thinking, navigation, strategy and creativity.

Morris asks Kluge to speak of his beginnings as the Frankfurt School’s lawyer, later working for Fritz Lang and eventually becoming one of the main figures of New German Cinema. Carse’s game theory becomes a focal point and encompasses all sociological and individual movements, whether aesthetic or otherwise, and questions the role of the artist in this scenario.

The relations between the freedoms of infinite possibilities versus the rule-based operations of finite game playing are at the center of a dichotomy laid out by Morris and Kluge.

Somewhere half-way through Arthur Jafa’s Love Is the Message, the Message Is Death, an extract from the YouTube video ‘Don’t Cash Crop My Corn Rows’ by actress and singer Amandla Stenberg sees her ask: “What would America be like if we loved black people as much as we love black culture?”

This question lingers beneath and around the montage of new, archival and found footage that is Love Is the Message, the Message Is Death, a 7-minute epic set to rapper Kanye West’s gospel-inspired 2006 single, Ultralight Beam. In it, the full contradiction of Black life in America is exposed through montage: images spliced together show celebrated cultural and political icons (Nina Simone, James Brown, Dr Martin Luther King, Jr. and many others), and juxtaposed to this, the victims of violence of a racist apparatus that treats Black lives as expendable, captured by friends, family and witnesses with mobile phones and then uploaded online.

The video’s title, Love Is the Message, the Message is Death brings together the title of MFSB’s 1973 hit single ‘Love Is the Message’ and the short story ‘Love Is the Plan, the Plan is Death’ by James Tiptree Jr. (pen name of Alice Sheldon), also from 1973. It offers up a vision of Black history in America that is fundamentally fragmented, both starred with and scarred by power, beauty and trauma. The result, in Jafa’s words, is “both voluptuous and austere at the same time”. Sobering, compelling and enraging, it is a poem and a call to action at once.

Arthur Jafa’s ‘Love Is the Message, the Message Is Death’ is a video of the Maja Hoffmann / Luma Foundation Collection and was previously presented in France at Luma Arles, Parc des Ateliers in 2017.

Perry makes work about blackness, black femininity and African American heritage, often taking her personal history as a point of departure. Her use of digital tools and material, ranging from blue screen technology and 3D avatars to found footage from the internet, reflects on these modes of representation and the abstraction of black identity in art and media.

Perry has said: ‘I’m interested in thinking about how blackness shifts, morphs, and embodies technology to combat oppression and surveillance throughout the diaspora. Blackness is agile.’

Sondra Perry: Typhoon coming on was initiated by the Serpentine Galleries and curated by Hans Ulrich Obrist and Amira Gad.