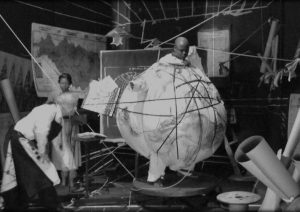 For the first time in Scandinavia Louisiana is presenting a major solo exhibition of the South African artist William Kentridge (b. 1955), who is known all over the world for his drawings, films, sculp­tures, performances and opera and drama productions.

William Kentridge is born 1955 in Johannesburg, where he still resides and has his studio. He had his breakthrough in the early 1990s with poetic black-and-white stop-motion films, but since the turn of the millennium he has developed his formal idiom and combined his love of both the film and theatre world in a series of overwhelming installations – environments, or a kind of theatrical stages in which the viewer is enveloped and overwhelmed by compositions consisting of moving images, music and sculptural objects.

At the heart of the exhibition is humanity; colonized, regulated, oppressed, fleeing or dreaming humanity. With great humor, empathy and poetry Kentridge’s works show how human beings navigate the world, and how much we are marked by and subject to mappings, concepts of time and ideology.