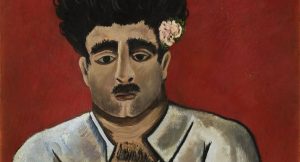 Hailed as “America’s first great modern painter of the 20th century” and “one of the most intriguing art historical subjects of all time”, Marsden Hartley remains relatively unknow to a European audience. This Louisiana presentation marks the first major retrospective exhibition of his work in Europe in over 60 years.

The work of the American painter and poet Marsden Hartley (1877-1943) can be regarded as a bridge between European and American modernism. Hartley lived much of his life nomadically between Europe and the USA, and his travels produced a number of profoundly original groups of works from 1906 until 1943. Among these we can count a series of abstract paintings created with a point of departure in military symbols from the horrors of the First World War; desolate, almost surreal landscapes from New Mexico; feminized figure paintings of muscular working men.

Before World War I Marsden Hartley participated in Gertrude Stein’s famous salons in Paris and visited Wassily Kandinsky and Gabriele Münter in Munich, and Franz Marc invited him to show his mysterious pictures at the famous exhibition Erster Deutscher Herbstsalon in Berlin in 1913 alongside the other members of Der Blaue Reiter.

In his home country too Marsden Hartley mixed with the artistic elite. In New York he was a member of the circle of the famous photographer and forward-looking gallerist Alfred Stieglitz, who helped him financially on all his travels and spread knowledge of him. Despite his central position on the art scene of the time, Hartley has remained a neglected name in the USA and an unknown figure in Europe, perhaps because of the many-faceted character of his oeuvre, which has made it difficult to place him in the history of art.

Louisiana’s Marsden Hartley Retrospective is one of the largest presentations of the artist’s work to date and the first major exhibition of his work in Europe since 1960. Presenting more than 110 paintings, the show will emphasise the artist’s dual role as both a painter and poet. As a supplement to the retrospective format, Louisiana has conducted a series of filmed interviews with living artists about Hartley. Among the contributing artists are: Dana Schutz, David Hockney, Sam McKinniss, Shara Hughes and David Salle.

The Marsden Hartley exhibition is generously supported by the Augustinus Fonden and Terra Foundation For American Art.