Louis Vuitton Foundation: “The Courtauld Collection – A Vision for Impressionism” 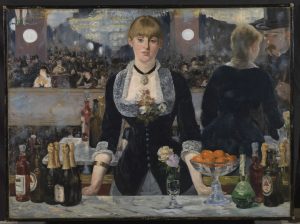 Edouard Manet, A Bar at the Folies-Bergère, 1882

The Courtauld Collection: A Vision for Impressionism brings together some 110 works, including 60 paintings and graphic pieces, which are mainly conserved in the Courtauld Gallery or in different international public and private collections. It will enable the French public to discover some of the greatest French paintings from the end of the 19th century and from the very beginning of the 20th century in Paris, 60 years after their first presentation in 1955 at the Musée de l’Orangerie. These works include A Bar at the Folies-Bergère (1882) by Manet, Young Woman Powdering Herself by Seurat (1889-90), The Card Players by Cézanne (1892-96), Self-Portrait with Bandaged Ear and Pipe by Van Gogh (1889), Nevermore by Gauguin (1897), as well as a set of ten watercolours by J.M.W. Turner which belonged to Samuel Courtauld’s brother, Sir Stephen Courtauld.

His collection—built up in less than ten years between 1923 and 1929 in conjunction with his wife Elizabeth—was first shown in their neoclassical residence Home House, built by the architect Robert Adam in 1773–77, and located in Portman Square in Central London.

Samuel Courtauld played a fundamental role in the recognition of Cézanne in the United Kingdom, by building up one of the greatest collections of the painter’s work, including Montagne Sainte-Victoire with Large Pine. Another strong point of the collection was the work of Seurat, with a significant collection of 14 pieces.

On the basis of a “humanist” conception of art, the Courtaulds developed a philanthropic approach and the will to share their collection as widely as possible. Their generosity is apparent in their collection which soon became accessible to the public, and in the Courtauld Fund, specially intended for national institutions.

In 1931, Samuel Courtauld’s desire to give the public access to the history of art and to the works led him to create the Courtauld Institute, housed in the family residence of Home House. He added 74 pieces, or half of his collection (paintings, drawings, prints), which were freely accessible to the students. The remainder of the collection, as well as several works which were acquired later on, was bequeathed to the Courtauld Institute upon his death.

The Institute’s great originality is the combination of the collection with research and teaching which, alongside the history of art, includes techniques for the conservation and restoration of work. This cultural institution has achieved and sustained an international reputation. It boasts exceptional documentation resources—in architecture especially—and remarkable archives. In 1989, the Courtauld Gallery moved from Home House to its current location, Somerset House, built by William Chambers between 1776 and 1796, which was the former London headquarters of exhibitions by the Royal Academy of Art.

The temporary closure of the Courtauld Gallery for renovations, from September 2018, has made this exhibition possible. Over the course of several years, the operation, known as Courtauld Connects, will involve the transformation of the Courtauld Gallery and Institute of Art, and namely the restoration of the Great Room, built by Sir William Chambers between 1776 and 1779 for the annual exhibitions organised by the Royal Academy of Arts until 1836, which has hosted exhibitions by Reynolds, Gainsborough, Constable, and Turner.

The exhibition of the Courtauld Collection embodies the Fondation Louis Vuitton’s aim to showcase the role of emblematic collectors from the history of art, following on from previous exhibitions organised by the Fondation which have brought together great works of Modernism, collected by prestigious public institutions: Keys to a Passion (2014–15), Being Modern: MoMA in Paris (2017–18) and by inspired collectors: Icons of Modern Art. The Shchukin Collection (2016-17).