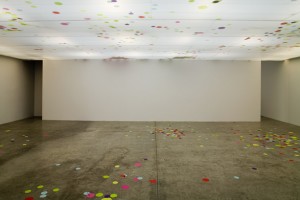 The Brazilian artist Rivane Neuenschwander has become widely regarded for her often ephemeral work that explores narratives about language, nature, social interactions and the passing of time. Showcasing Secondary Stories, a room-sized installation, as well as three video installation works,  Linda Pace Foundation trustee Kathryn Kanjo states, “The Linda Pace Foundation is delighted to present this hypnotic installation by Rivane Neuenschwander. In Secondary Stories, she seems to take viewers through the looking glass: the outsized confetti makes us feel small and we become lost in the slowly shifting play of light and color. Since her Artpace residency in 2001, Rivane has achieved great acclaim, with major exhibitions at the New Museum 2010 and mal-entendidos at the Museu de Arte Moderna de Sao Paulo in 2014, which included a version of Omission Points, created at Artpace.”

Born in 1967 in Brazil, where she continues to live and work, Neuenschwander is informed by the Neoconcrete movement of the 1970s. Her work offers concrete manifestations and discrete objects to be observed, considered, analyzed and understood for significance beyond the verbal. She received a BFA from the Federal University of Minas Gerais, Brazil in 1993 and completed her MFA at the Royal College of Art in London. Winner of the Yanghyun Prize in South Korea in 2013 and shortlisted for the Guggenheim Museum’s Hugo Boss Prize in 2004, the artist has exhibited her work internationally throughout the past twenty years.