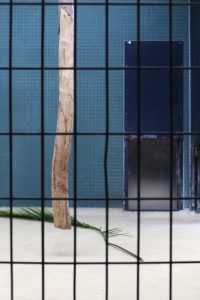 This solo exhibition Limbo by the artist collective FORT, comprised of Jenny Kropp (b. 1978 in Frankfurt am Main) and Alberta Niemann (b. 1982 in Bremen), FORT creates installations, videos, and performances. In their works, which are usually site-specific, they concentrate on the blurring of the thresholds between the every day and the mystical, the rational and the irrational, thereby allowing the beholders to experience the fragility of this order.

To this end, FORT works with everyday objects, conveying them into the exhibition space, or creates spatial situations that are often reminiscent of film sets. Their set pieces from reality originate in our urban lifeworld: individual architectural elements like windows and doors, but also an entire petrol station or the furnishing of a drug store from the Schlecker chain, are used as ready-mades or meticulously reconstructed. However, through subtle interventions and a purposeful integration of voids, FORT transforms otherwise ordinary objects, making the seemingly familiar appear strange and peculiar.

Here, the image spaces that shift into the phantasmal realm reflect how strongly a filmic view culturally determines the present. Cinema serves not only as reference point and source of inspiration, but also as a template for the reception of works by FORT that are experientially rather than conceptually accessible. The created scenarios evoke moods and, due to their ambiguity, invite the beholder to develop stories from their own imagination. Charged with imaginative power, some objects may seem alive, repeatedly giving rise in the settings to questions about the boundaries between animate and inanimate realms

For their exhibition at the Langen Foundation, FORT has produced a series of new works which allow the beholder to become immersed in an atmosphere that oscillates, in an astonishing way, between gruesome, melancholy, and humorous. With abandoned lion cages, secret apartment doors, and a group of different dog houses, which more resemble human than animal dwellings, it becomes tangible how the wild, the unconscious, is being civilized, prepared, and architecturally fenced in. A display of headless busts that are aligned along a display window enhances the effect of this arrangement, which fields complex questions about the domestication of the non-rational while also formulating resistance with a five-meter-high balled fist. FORT’s exhibition which can be understood as political-poetic commentary is titled Limbo. This polysemous word can mean confinement in English, but it also stands for a state of uncertainty or an imaginary place of neglect or oblivion.

FORT was founded in 2008 by Anna Jandt (b. 1980 in Bremen), Jenny Kropp (b. 1978 in Frankfurt am Main), and Alberta Niemann (b. 1982 in Bremen). Since 2014 Jenny Kropp and Alberta Niemann have continued to work as an artist duo under the name FORT. They live and work in Berlin. Important solo exhibitions include: Night Shift, Casino – Forum d’art contemporain, Luxembourg (2017), Retired, LWL: Museum für Kunst und Kultur, Münster (2016), Shift, Kestner Gesellschaft, Hannover (2015) und Morgen letzter Tag, Kunsthaus Dresden (2013). FORT was the recipient of the Cremer Prize in 2015, the Studio Scholarship of the Cultural Foundation of Hesse for New York in 2014, and the Karl Schmidt-Rottluff Scholarship in 2012.