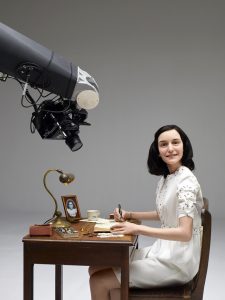 Devised around the Foundation’s recently renovated building, Revolution groups large-scale works and installations, including two major new commissions produced with Lafayette Anticipations. It carries on a dialogue with the artist that began in 2014, with the enactment of his New Pompidou for the Foundation’s prefiguration programme.

Via a group of works shown throughout the Foundation’s galleries, Simon Fujiwara addresses the importance within our society of mass media and the fetishisation of the individual experience in an era of new technologies. His practice forms a complex and critical response to the omnipresent need for self-presentation in contemporary society.

The exhibition opens with a unique immersive experience. Empathy I (2018) was inspired by the artist’s experiences of popular leisure sites, from historical tourist attractions such as Neuschwanstein Castle to theme parks such as Disneyland. Closely collaborating with a company that designs theme park rides, Simon Fujiwara has developed his own immersive simulator experience which, rather than dealing with fantasy or historical experiences, brings the viewers into the “real world” by simulating found footage and first person perspective camerawork.By mimicking the gestures of the various people’s experiences in the film, the installation suggests a physical connection between the images on the screen and the audience’s own bodies. Fujiwara’s point of departure for this work was his interest in the accelerated dynamics of today’s production and consumption of images in an age of mass social media. Empathy I radically shifts the focus from the image to the body; the artist describes the work as a “sculptural experience” rather than a film. Experienced in an intimate setting—the work can only be viewed by two visitors at a time—Empathy I translates and augments other people’s experiences—from the tragic or the ecstatic to the banal—into one’s own physical experience. As such, the duration of the work is a function of the human body’s biological constraints, and its content selected according to the brain’s ability to register meaning under such intense simulated physical conditions. In this sense, the images evoke the primary bodily experience of danger, stillness and speed, sadness and pleasure. In a socio-technological climate where the individual is increasingly prized over group or mass identification, Empathy I reflects on an increasingly simulated world which is at once thrillingly emotive and disturbingly efficient.

The show continues with the Joanne series which revolves around a number of large-format photographs and a film. Joanne Salley was Simon Fujiwara’s secondary school art teacher who, in 2011, was forced to resign after topless photographs of her were circulated without her permission. The series points to the tabloids’ ability to destroy this former beauty queen and, more widely, questions women’s image in the mainstream media.

The Happy Museum was developed in consultation with the artist’s brother, Daniel, a “happiness economist” who quantifies social impact as data which companies, governments and NGOs then use to evaluate policy as a means of fostering wellbeing. First produced for the 9th Berlin biennale this ongoing exhibition format assembles diverse objects and artifacts as material manifestations of deep societal contradictions. Fujiwara likens his installation to a news feed, the objects often changing or ‘updating’ with each exhibition of the work.

On the last floor, Likeness is a continuation of Hope House, Simon Fujiwara’s exhibition at the Kunsthaus Bregenz earlier this year: a full-scale replica of Anne Frank’s house based on a build your own cardboard model kit on sale in the museum gift shop.

Likeness, which Fujiwara has produced specifically for Revolution, again introduces a copy into the exhibition space; in this instance a wax figure of Anne Frank produced from an amalgamation of images, sculptures and other wax figures of Anne Frank including the Madame Tussaud’s figure in Berlin. It shows Anne writing her diary at her desk, surrounded by objects referencing her hiding place. Eternally fragile, frozen in time, she turns to smile at the public. How much of a likeness the figure is unknown, given the few documents available to the wax sculpture production team who are former employees of Madame Tussaud’s.

Taking to the extreme this irresistible need for image production—already evidenced by endless streams of selfie-taking museum visitors—Simon Fujiwara uses a Bolt camera robot to film the wax Anne Frank, scrutinized in a near forensic manner. As a choreographer of images, he explores the camera’s ability to surround, document and dramatise the figure with disconcerting precision. Like a counterpoint to the Lafayette Anticipations machine-building, Likeness foretells of a mechanised world in which the notion of a collective memory clashes with the cold and invasive objectivity of moves once performed by humans.