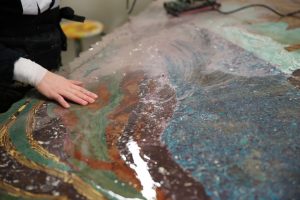 Drawing its title from W.B. Yeats’ landmark poem The Second Coming (1919), the exhibition reverses the Irish poet’s lamentation of a world losing its meaning to embrace the phrase—“the centre cannot hold”—as an affirmation. Featuring a group of French and international artists, the exhibit tackles the current reinforcement of cultural, social, and political categorizations, and hints at the necessity of producing more subtle and less dichotomous methods to address them. It postulates that these differences, understood not in terms of separation, but as intimately linked categories, could foster a rebalance of power.

Exclusively constituted of new commissions (films, installations, performances, and sculptures), most of which have been produced on-site in the Fondation’s workshop, Le centre ne peut tenir highlights the voices of practitioners engaged with shifting identities and geographies. It gathers investigations into the construction of the self at a time of ever-fluctuating borders, prompting an urgent reassessment of local and global interactions.

The exhibition will be accompanied by a book conceived, RISO-printed and bound at Lafayette Anticipations, as well as a public program marked by two day-long symposia on Saturday, July 7 and Saturday, September 8, that will elaborate on the artists’ investigations and methodologies. In addition to the exhibited artists, speakers and performers include: Titilayo Adebayo, Omar Berrada, Nkisi, Ippolito Pestellini Laparelli, Maboula Soumahoro, and Claire Tancons.