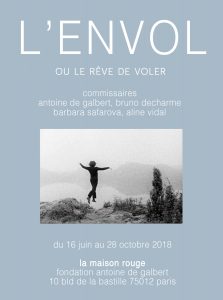 Antoine de Galbert has invited Barbara Safarova, Aline Vidal and Bruno Decharme as co-curators. Together, these specialists in art brut and contemporary art have imagined an exhibition that examines mankind’s dream of flying – though without any reference to those who have actually made this dream come true.
As always at La maison rouge, the curators have considered the subject matter independently of “categories” to bring together works of art brut, modern, contemporary, ethnographic and folk art. A walk through the various themes reveals a succession of some 200 works, including installations, films, documents, paintings, drawings and sculptures.”In the beginning there was Dedalus, that inspired inventor who dreamed of escaping into the skies, taking his son Icarus with him. Harnessed to wings made from feathers and wax, they rose into the heavens, intoxicated with their flight, borne aloft into the atmosphere. We all know what happened next. Icarus ventured too near the sun, his wings melted and he hurtled into the sea to die.
From legend to reality, the sky has always been a dangerous playground for mankind. This is no small undertaking by the 130 artists in L’envol, as they endeavour to challenge the laws of gravity, break free of Earth’s magnetic field, launch themselves into the unknown or experience the gaseous envelope of the atmosphere between two periods of turbulence. Some are hedonists, others are activists, intent on saving mankind as the world heads for destruction, whether by building flying shelters or constructing utopias.
The sky offers ample territory for experiment, shared between the extravagant artists who are convinced of their ability to overcome gravity and the gods that live there, and the conceptualists designing utopias – more poet than scientist.”  Excerpt from the exhibition catalogue, introduction by Aline Vidal.
curators
Antoine de Galbert
Bruno Decharme
Barbara Safarova
Aline Vidal
L’envol is the final exhibition at La maison rouge, which will close its doors for the last time on October 28, 2018.
La maison rouge
10 Boulevard de la Bastille
75012 Paris | France
http://lamaisonrouge.org/en/