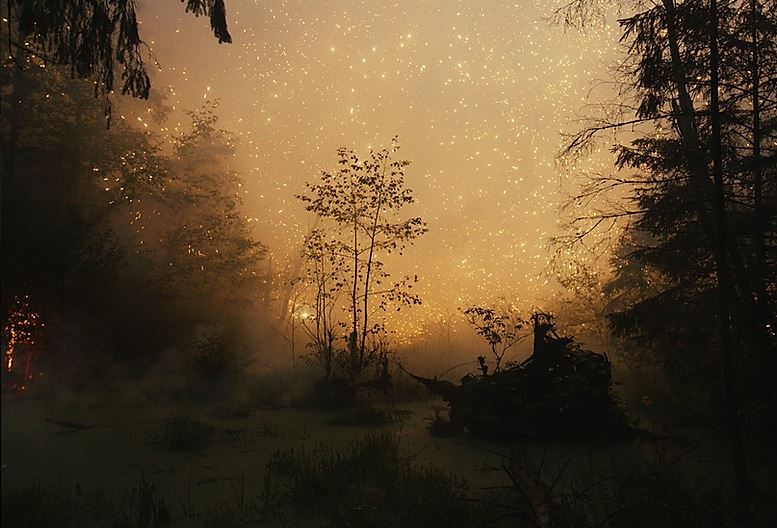 The exhibition Great Patriotic, shown in the exhibition hall, presents three Russian artists whose works reflect civil society, questioning the grand narratives about the history of the country. Lately, the struggle of activists, journalists and opposition politicians facing state censorship has received broad media coverage. In addition, Kunsthall 3,14 sees it as pertinent to give voice to system critical artists from the civil population from the inside. Sergei Prokofiev, Evgeny Granilshchikov, and Zink Zine (represented by Sasha TSE) have all lived and worked in Russia until recently, when they fled their native country in response to the war escalations and Putin’s mobilization orders. The exhibited works are all produced in Russia before 2022, reflecting both uneasiness and anticipation of the coming violence outbreak. The artists employ the performative possibilities of video to document and express social and political processes in post-Soviet society and challenge dominant ideas about Russian culture. Especially about the Second World War, which is formally remembered as the Great Patriotic War in the former Soviet Union.

One can hardly exaggerate the importance of the remembrance of this war still in Russia today. A very selective narrative of the conflict with Nazi Germany forms an integral part of Russian political culture, functioning a tool for policymaking. Understanding Soviet wartime mobilization aids in contextualizing current state rhetoric. As the successor state to the Soviet Union, Russia’s self-perception of its great power status is arguably dependent on this legacy and a sense of moral superiority. Any challenges to Russia’s image as the Second World War’s victor and prime liberator might harm the country’s sense of identity, a return to greatness, and geopolitical ambitions. The current Russian government is extensively using the Great Patriotic War as a unifying force and sacred myth, which involves constant makingpresent of the war experience as part of the rhetoric of renewed Russian nationalism. Officials condemn attempts to contest or disagree with the state-sponsored narrative as attempts at historical falsification, an action that is frequently criminalized. The memory of this victory and how it was gained were institutionalized in Russia’s 2020 constitutional changes. The Putin regime’s efforts to (ab)use the memory of the war are welldocumented. But it is rarer to find coverage of how the Kremlin’s intensive efforts to appropriate the 1945 victory as its own effectually take away from the people the opportunity to create alternative histories. Great Patriotic is an effort to support Russian artists’ freedom to research their own complicated past, to engage in an unlearning process, pay respect to the suffering of the deceased, and to discover non-political means to move forward.

In the film The Comfort Zone (2017) by Zink Zine, the camera shows a peripheral town in Northern Russia from a children’s perspective. Lacking stimulating outdoor spaces, the children inherit the games of the patriarchal society where “voinushka” (a war game) is widely accepted and normalized. In an extended sense, the work can be viewed as a reflection of how Russia exploits the brothers-in-arms mentality in order to cement the idea of a unified Russian community – which is constantly threatened from the outside, according to the official rhetoric. The overall aim is to mold its own citizens into thinking of the use of force as a natural and justified tool in the Russian state’s foreign policy. The authoritarian philosophy of power in Russian political culture renders the official historical narrative strongly
ideologized. With time, it has begun to function as a substitute for the state ideology banned by the Russian constitution. One might wonder, when having less to offer its citizens in the future after the war in Ukraine is finally over, whether the myth of the Great Patriotic War will gain more importance?

The samizdat (underground) journal and photograph presented in the exhibition also document the Russian periphery, but through the
perspective of an insider rather than a visiting photographer. The gaze of the local young people represents the everyday from the unexpected perspective of young male artists growing up in a gradually re-militarized society.

Evgeny Granilshikov’s video performance A Family Dinner Set (2020) shows a young man destroying tableware inherited from his
grandparents. Through this act, he alludes to the relationship between physical and cultural inheritance. Where do these objects originate?
Through the artist’s symbolic gesture, personal memory is reconstructed as part of an unlearning process characteristic of the last generation born in the USSR. In the official narrative in Russia, the Second World War is associated not so much with the suffering of the nation as with festive military parades celebrating the victory in 1945. As a consequence, the atrocities which took place – such as violent lootings – have not been publicly addressed and processed properly. What narratives remain overlooked in the state-created history of the Great Patriotic War? Such questions have gained renewed relevance in 2022, when soldiers from various corners of the Russian periphery are sending back to their families looted property of Ukrainians: there have been widespread reports and evidence of Russian looting in
southern and eastern Ukraine. As Western media outside of Russia show, the occupiers steal local cars and trucks, on which they take away property from civilian houses and apartments. Looting during wartime is prohibited by international law and considered a war crime.

“We should begin with the simplest of things and movements. Simplify
language to gestures. Strive for a focused clarity. Create new art. A family
dinner set is a symbol of voicelessness where political narratives of many
generations become suspended.” – Evgeny Granilshikov

Sergei Prokofiev contrasts the wilderness of Russia with the unrest that permeates Russian culture. The videos Fireworks on the Swamp and Fan of the Land (2021) reflect the tense social climate and the oppressive political environment experienced during the last few years, expressed through an artistic exploration of pyrotechnics as a medium. In his research for this series, Prokofiev discovered that Russian state power has employed fireworks to communicate with its populace ever since the days of the Russian Empire. He made the decision to employ fireworks to reverse this former official language where pyrotechnics would be fired from military canons, to activate it for his own aim in order to metaphorically liberate various landscapes from the control of the Russian state. Over time, Prokofiev’s firework pieces have acquired ever-new layers of meaning and significance. From another vantage point, one can interpret them as imprints of human life, with all its excitement, traumas, and events that all of a sudden stop occurring and start to fade like a memory. Fan of the Land is a reflection on fan culture. Another group that extensively uses pyrotechnics are football hooligans. Young people in good physical shape, who are not afraid to pick a fight with police officers, are expected by some to instigate a revolution for freedom. They use the language of
military pyrotechnics, including smoke bombs, pyrostrobes, and stroboscopes powered by fire. Since nobody knows what is going to happen once they take to the streets, there is also a tangible tension lurking beneath the feeling of power this gives rise to. If the hooligans won their way, would they actually step aside to give room to a more democratic process?

Zink Zine is a collective of young photographers, filmmakers, street artists, and skaters originally from Arkhangelsk. The underground magazine exhibits attentive observations of everyday life in a peripheral town where city design is managed by police officials. The lack of infrastructure in arts and design creates a similar “hostile environment for art” where an artist should fight for visibility and acceptance.

Evgeny Granilshchikov (b. 1985) works with various media, including video and sound art, photography, installation, and independent experimental cinema. In many of his projects, the artist refers to the big questions of his generation, such as the phenomenon of collective trauma, and themes of personal and political frustration. He has studied at Rodchenko School of Photography and Multimedia, Moscow, Institute of Journalism and Literature, Moscow, and Lyceum of Animation Cinematography, Moscow.

Sergei Prokofiev (b. 1983) current work includes sculpture, installations, performance and video. His works and entire career are inextricably linked to Russia’s political reality and its great popular resistance, and he often engages in collaborative international projects. Prokofiev is a graduate from the School of Contemporary Art “Free Workshops” at Moscow Museum of Modern Art (2011), and the Institute of Contemporary Art (ICA), Moscow (2013).