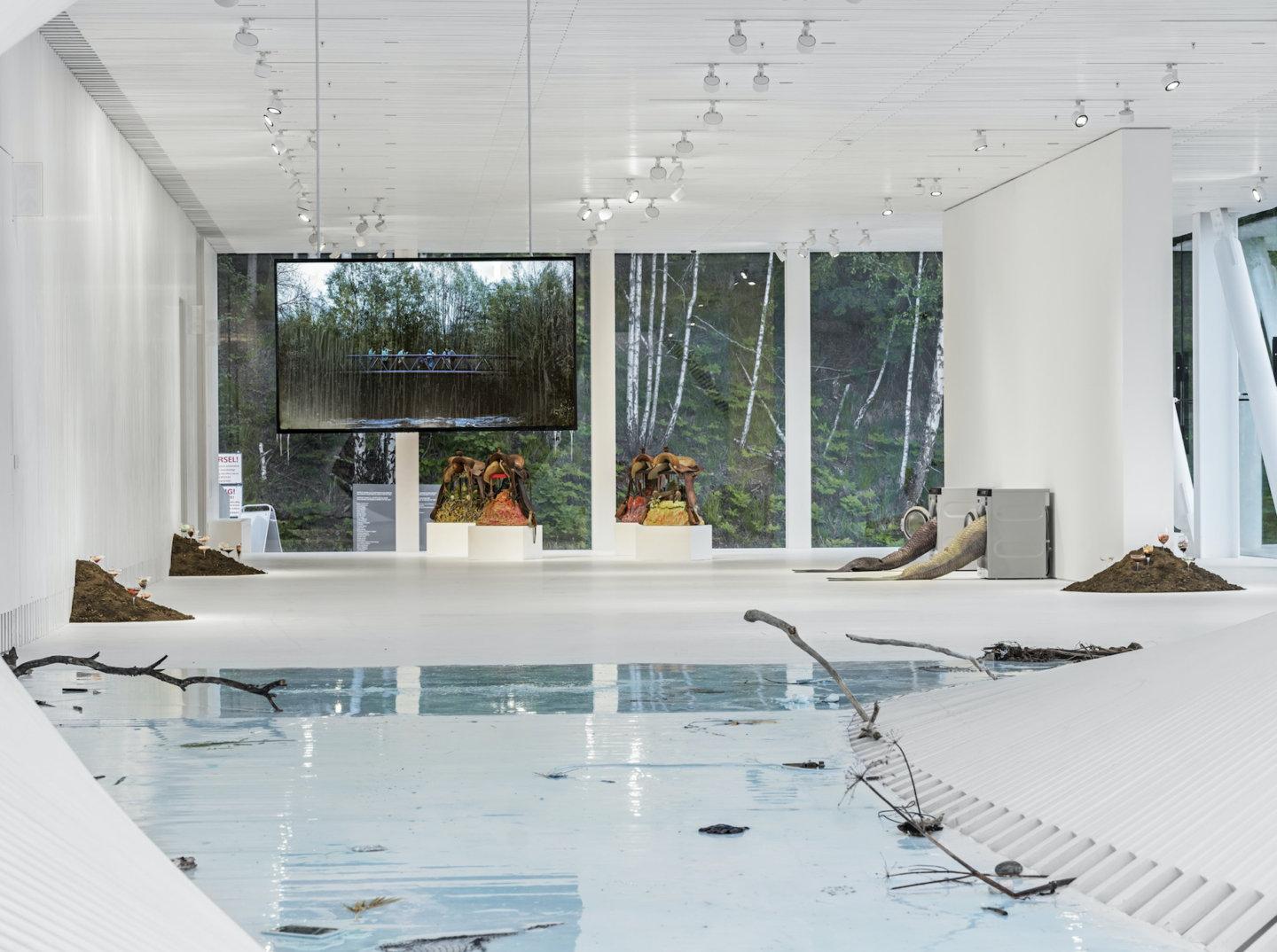 Liquid Life is a group exhibition presenting the works of seven international visual artists —among which five new commissions—, and a collaborative sound piece, all inspired by a reflection on the relationship between humans and nature through postmodern ecology, eco-feminism and biology. The exhibition is rooted in the expression of ‘liquid modernity’, coined by the Polish sociologist Zygmunt Bauman to define a postmodern world governed by immediacy and communication, which erodes the anchored ties between people and bodies by revealing the fragility of a society based on individualism and constant change.

Presented inside the Twist and in its outdoor surroundings, the exhibition connects the hypermodern architecture of the building to its natural environment in the mystical Norwegian woods that envelop it, highlighting the tangled relationship between nature and humankind and interrogating our ability to co-exist and evolve together.

Welcoming the visitors like a gate-keeper or a troubling sentinel leaning against the wall, Sandra Mujinga’s corner tent-like sculpture evokes a spectral presence while assuming the role of architectural hiding places. The installation is enhanced by a green light that immerses the viewer into an environment that feels like a nightclub or a travel dystopia.

Cécile B Evans’ for A Future Adaptation of Giselle (Willis’ battle of whatever forever) is a three-channel film installation that is part of an ongoing adaptation of the classical Industrial era ballet Giselle. The work is anchored in the struggles of a family as they try to adapt Giselle into a revolutionary eco-feminist thriller while the modern world is collapsing.

Inspired by her project for the French Pavilion of the 58th Venice Biennale, Laure Prouvost has coated the floor of the Twist with bluish resin, ornamenting its surface with shattered technological junk, glass objects and found material from around the Museum. This immersive river of resin conveys the attention she gives to the natural and human elements that surround her.

Overlooking the river, Pierre Huygue’s work is an output from his project UUmwelt, conceived as a co-production of imagination between a human and a machine using a brain-computer interface. The work is a mental image that has been turned into a physical object and composed of an aggregate of synthetic and biological materials and micro-organisms set to modify according to its environment and, ultimately, erode with time.

In her installation Olivia Erlanger exhibits a series of silicon life-size mermaid tales hanging from the open doors of washing machines. The chimeric surrealism of these mythical creatures seems to wittily contrast with the raw functionality of the washers, echoing the industrial site of Kistefos and its dialogue with the magical woods that surround it.

Fascinated by the human body as a place of encounters where microbiology, materials and personal stories convene, Ane Graff has disseminated four series of goblets containing an assemblage of materials. Empowered by a collaboration with scientist Tal Danino, she was able to add bacterial cultures and pigments to her sculptures that act as a living invasion of the exhibition space by a local flora.

Max Hooper Schneider’s installation consist of a shrine-like desert assemblages, a scavenged freeway sign, and an aluminum cast of a demolished treadmill. The resultant installation attests to the artist’s interpretation of ecological myth-making as founded in the conditions presented by a unique temporal and spatial ordering that remains in flux.

A collaborative soundscape work, composed and produced by electronic musician and producer Samson with a group of international musicians, greets the visitors in the woods into the exhibition space, and as they walk outside of the Twist. Inspired by liquidity and Norwegian folk culture, this experimental piece takes as a point of departure the sonic surroundings of the Museum.

Listen to the soundtrack here

The exhibition was made possible thanks to the generous support of Kistefos AS, Ballet National de Marseille / (LA)Horde.