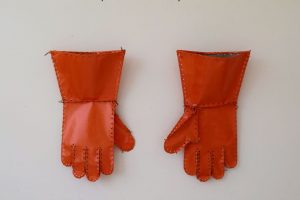 “The skill in art is to take people on an adventure or let them create an adventure of their own and then hope that others will follow” Klaas Kloosterboer.

Klaas Kloosterboer (1959) is a painter whose versatile work always bridges the gap between abstraction and action. Kloosterboer’s work is always based on an act, such as when he determines a location on a canvas using techniques such as cutting, throwing paint and sewing. Kloosterboer questions the art of painting on both the elements used to make it and the way it is shown. As a viewer, you are confronted with the process of painting. His work is therefore not an illustration of thoughts but is often an act in itself. Sometimes you see a life-size sewn linen costume hanging up, or a series of painted boxes, or then again a video filmed through the rear window of a car showing two giant balls being towed along a road. Kloosterboer’s work is dynamic, quirky and clear.

The controversial group exhibition “Dumb Painting” in the Centraal Museum in Utrecht in 1992 introduced the work of Klaas Kloosterboer to a larger audience. His participation was striking because his work emphatically did not strive for a far-reaching reduction in abstract painting, but rather sought to render imagination concrete. That was a relief at the time. More than 15 years later in the context of The New Collection, he had a solo exhibition in 2009 at Boijmans van Beuningen in Rotterdam, in which his recent work was brought together with paintings from the 1980s. It is the first time in 10 years that Kloosterboer again has a solo exhibition in the Netherlands.

Brigitte Bloksma, director of Kasteel Wijlre estate, on Klaas Kloosterboer: “Kloosterboer’s working method is characterized by both a form of almost aggressive action and subtle gestures, sometimes united in one work. His works always exude something active, and a cheeky playfulness that sometimes leaves the viewer in an agony of doubt.”