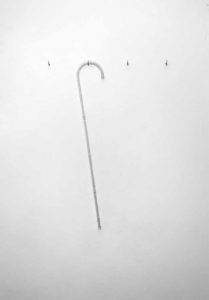 Kasteel Wijlre estate presents a solo exhibition by the contemporary artist Chaim van Luit (1985, Heerlen). The exhibition focuses on the dialogue between Chaim van Luit and Jo Eyck (1929, Heerlen), art collector and the estate’s founder. This collaboration is the second edition of long-term Conversations programme. Every two years, Conversations invites an artist, filmmaker, designer, or art collector for a presentation in the Coach House, the starting point for which is always the idea of ‘the conversation’.

For this exhibition, Chaim van Luit (1985) enters into dialogue with Jo Eyck (1929). As an archaeologist, Van Luit reveals layer by layer different memories, anecdotes and stories, which he incorporates into the exhibition, either directly or indirectly. The exhibition’s starting point is Jo Eyck’s childhood room, where he spent many hours in front of the window during a protracted illness. In this period, he learned to look, thus laying the foundation for how he arranged his life around art and nature.

For this exhibition, Chaim van Luit translates Jo Eyck’s children’s room into an installation. He presents a selection of works in and around this structure. Van Luit’s objects in the exhibition illustrate the connection between past and present and address issues raised in the conversations between Jo Eyck and Chaim van Luit. As such, the works explore notions of domesticity, nature, looking, the relationship between inside and outside, and the passage of time.

Chaim van Luit places archaeology in the context of art. While strolling through forests and cities, Van Luit collects unusual materials, such as salt, stone or fireworks. The finds provide a starting point for his sculptures, photos and videos. At first glance, the simple, reduced forms stand out. Upon closer inspection, the images often appear to carry vestiges of a specific history, such as the wayfinding created by visitors in Limburg’s marl caves or scars on a person’s skin. Van Luit meticulously documents his quests for secret entrances, hidden cave systems or objects. His fieldwork often constitutes the work of art itself.