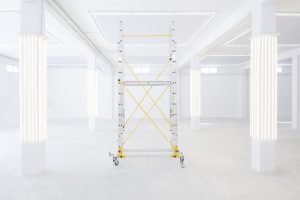 B7L9  is an experimental art space imagined and developed by the Kamel Lazaar foundation (KLF) in Bhar Lazreg, commonly written B7ar Lazra9 phonetically which has given life to B7L9, a rural land whose landscape has morphed organically amidst the political vacuum in the revolution aftermath. The new cutting-edge and category-defying space is conceived as a laboratory for KLF to connect, interact and expand upon its activities to date and trigger a regional dialogue with contemporary global developments in visual culture. While being anchored in the Mediterranean and global artistic landscape, B7L9 responds to KLF’s commitment to social impact in underprivileged areas through art and culture and aims to promote the exchange of knowledge and visions by encouraging guest artists to interact with local communities through workshops, seminars, events and an extensive outreach program. The space consists of three interconnected levels: an exhibition space that includes a projection room; residency facilities; a roof terrace that will comprise a café; an open library and a garden.

About KLF
Since its inception in 2005, the Kamel Lazaar Foundation for Art and Culture has initiated several cultural and artistic actions and projects whose local and regional effects put forward the vitality and diversity of the cultural scene in the MENA region. The foundation supports research, publication and exhibition initiatives and organizes scientific conferences and seminars as well as artists residencies and workshops. KLF’s backbone is among the most significant contemporary and modern art collections in North Africa and the Arab world. In 2011 KLF launched the online platform Ibraaz—a leading forum for critical exchange on visual culture in the Arab region, followed shortly by the first instalment of Jaou—an annual event bringing together artists, thinkers and change-makers to exhibit works of art and fostering a dialogue about contemporary creative practices in the Arab world. In 2017 KLF was the commissioner of Tunisia’s Pavilion titled The Absence of Path at the Venice Biennale after almost six decades of absence.

KLF is looking forward to fostering its actual partnerships and building new ones in order to carry on its mission and rally structures, institutions and cultural actors around a common goal: to develop, promote and support art and culture in Tunisia and lay the foundation of a future where they play a central role in personal and social growth.