KAI 10 | ARTHENA FOUNDATION: “Listen to the Image, Look at the Sound” 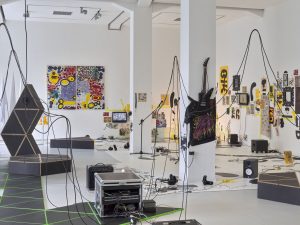 How images can become tones or sounds become images has always fascinated artists. In various works of contemporary art images, objects, music, sound and language interact in very different ways; a distinct boundary between static and moving forms of art is disappearing, making way for a complexity of different temporal structures. The idea of the exhibition is oriented on the concept of “soundscape”, that R. Murray Schafer developed in his book The Tuning of the World, published in 1977, and on John Cage and his interest in sounds and noises beyond composed musical forms. Hence, the focus is less on the link between art and (pop) music, but rather on artistic ways of dealing with visual and acoustic environments. But what remains of our perception of the environment, when images and sounds, much like all other digitalized data, can be manipulated arbitrarily?