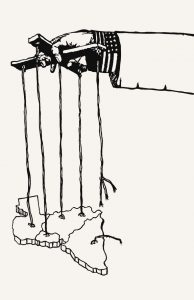 Culminating his residency at KADIST San Francisco, Pio Abad’s solo exhibition draws from multiple histories of exile, resistance, and displacement from the ’70s and ’80s that brought Filipinos to California, home today to one of the largest diasporas of this community in the world. The newly commissioned body of work departs from narratives related to the former Filipino dictator, Ferdinand Marcos, and his infamously extravagant wife, Imelda.

Choreographing a confluence of historical facts, Abad unearths the objects and archival material as proof of a perpetuated political fantasy that allowed the Marcoses to cling to their gilded power. Confuting the myth that the sociopolitical legacy of the Marcoses is one isolated to the Philippines, the exhibition summons a transnational cast of characters that have either been in favor of, or vitiated by the United State’s quest for empire and the perpetuation of its political mythologies.

Comprising sculpture, paintings, prints, and a photograph, Kiss the Hand You Cannot Bite reveals the underbelly of the sociopolitical mechanisms that allow authoritarianism to manifest today, whilst performing an elegy for those whose efforts were muted by the absolute power that perpetuates empires and dictatorships, for painful personal histories and imminent collective futures.