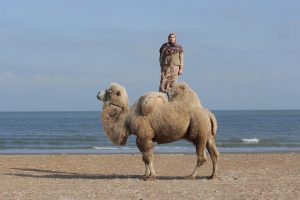 KADIST, Paris is pleased to present the first public presentation of Superhero Sighting Society, a project that follows Taus Makhacheva and Sabih Ahmed’s residency during 2019. This exhibition gathers witness accounts of superhero sightings from all around the world and presents a scenography by Super Taus.

Superhero Sighting Society was formed in the spring of 2019 after the resurfacing of a rare photograph taken in 1979 of Aydamir Aydamirov just as he was about to take flight in the mountains near Makhachkala (Republic of Dagestan, Russia).

Maintaining anonymity of its members, the Society raises awareness and promotes conversations around new figurations of power that have emerged amidst the seismic planetary and geopolitical shifts of the 21st century.

In 2011, while referencing superheroes in an essay titled ‘Is it a Bird? A Plane? No, It’s a Magic Chair’, Lawrence Liang proposed that, “the transformation of Clark Kent into Superman is always precipitated by a crisis, usually one large enough to potentially destroy the world. But what if it is not a monumental end-of-the-world that scares us, but the prospect of losing the small worlds that we inhabit and know: a bookstore disappearing, a public organization running out of funds, an independent gallery shutting down?”

This exhibition aims to invoke many such worlds (big and small). It invites all to conjure images and apparitions from a cacophony of voices; to re-render living environments through a congestion of narratives; and, to propose new morphologies of the contemporary through figures, personas, places and desires. These figures are as diverse and varied as the places they come from and the witnesses who sighted them. Together, they call in forests and the deep sea, mountains and desert-scapes, tea-shops and construction sites, public squares and neighbourhood gatherings, amidst a host of other locationwws where superheroes are seen.

An impetus behind this exhibition is to open a question that first brought Superhero Sighting Society together: How have different landscapes and geographies demanded different superpowers of the heroes arising from there? Furthermore, this exhibition asks, what kinds of superpowers can we imagine today in the different locations and milieus we inhabit?

Prior permission has been taken from all witnesses for sharing their stories. All the stories are open to interpretation.