KADIST, Paris: “Not Fully Human, Not Human at All” 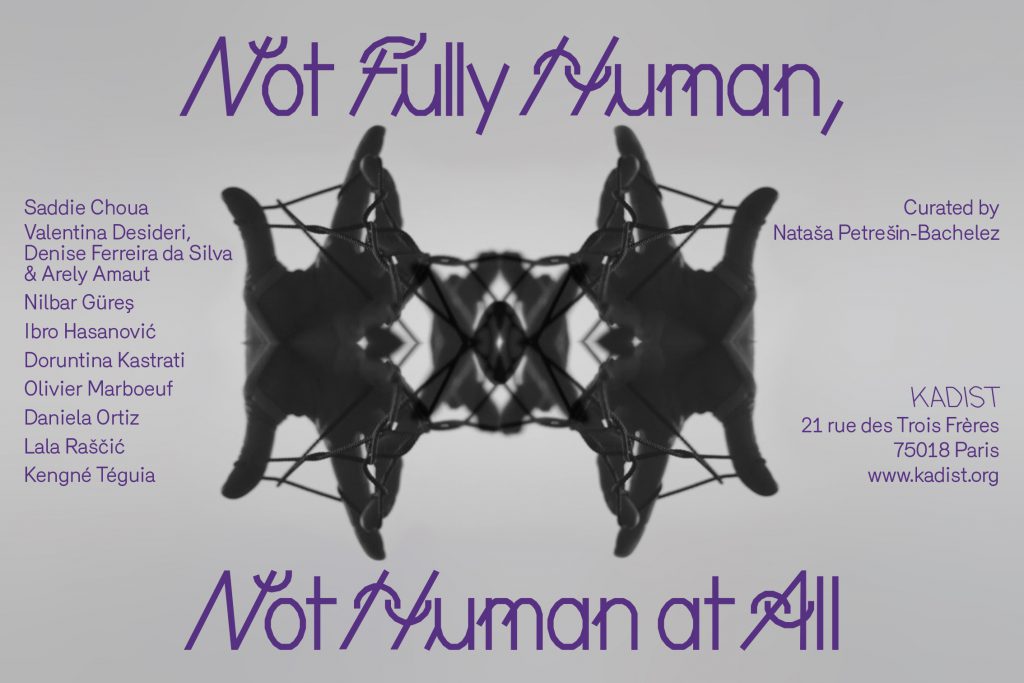 Initiated by KADIST in 2017 and curated by Nataša Petrešin-Bachelez, Not Fully Human, Not Human at All, is a three-year project, part of KADIST’s international programs, devoted to drawing connections between different localities by addressing global issues, in close collaboration with partner institutions and artists.

Focusing on Europe as a geographic and conceptual framework, Not Fully Human, Not Human at All was conceived in collaboration with like-minded local institutions[1] to produce three artistic commissions (with Lala Rašcic, Daniela Ortiz, Valentina Desideri and Denise Ferreira da Silva) together with a discursive program in the cities of Prizren (Kosovo), Aalst (Belgium) and Lisbon (Portugal).

Not Fully Human, Not Human at All takes its name from Donna Haraway’s essay “Ecce Homo, Ain’t (Ar’n’t) I a Woman, and Inappropriate/d Others”, a text which challenges the universal claims of Enlightenment Humanism in order to propose conditions of what she calls “non-generic” collective humanity. In this text, Haraway refers to Hortense Spillers’ description of the levels of dehumanization faced by enslaved people, especially enslaved women in the United States, their treatment of being disposable, and their lack of any legal subjectivity.

This exhibition looks into processes of dehumanization that are taking place in Europe. Dehumanization is generally understood as the degradation of human life, performed by human beings upon one another. Within Europe, a number of recent political and social occurrences have led to stricter policies of immigration, new forms of nationalisms, limits on universal access to healthcare, neo-liberal pressure on state economic policies, the erosion of rights for foreign workers, and the reevaluation of what defines Europe both culturally and geographically. These processes are coexistent with relations produced by the white privilege that defines who is considered human at all, and are part of a historically recurring process, starting with the colonial project of many European countries. The artists taking part in the exhibition question the obsolete category of the human, by imagining concepts from a new vocabulary of the process that can be called re-humanization.

The preparation of the exhibition itself was bound to the context of 2020, in which the process of dehumanization is intrinsically connected to the COVID-19 pandemic, which has intensified these pre-existing social, environmental and political crises. The incitement #stayathome exposed many social inequalities and increased domestic violence in France and elsewhere.[2]

Elísio Macamo wrote in April 2020 that “Covid-19 is a cruel reminder that crisis is us. As we brace up to look the pandemic in the eye, we would be well advised not to forget what our normal is, namely crisis. History has taught us that you do not master a crisis by setting the return to normality as your goal. You master a crisis by enabling yourself to act whatever the circumstances.”[3]

The exhibition at KADIST is an adaptation of the eponymous collective exhibition co-curated by Nataša Petrešin-Bachelez and Bettina Steinbrügge, presented at the Kunstverein in Hamburg (Germany) at the end of 2020 to conclude the three-year project.