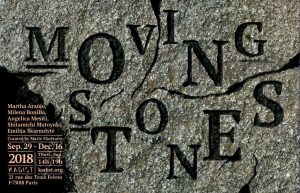 Reflecting on the relationship between History and memory, the group exhibition Moving Stones focuses on the body as a site of engagement to address our collective past embodied in public monuments. Despite their differences, public monuments and human bodies also share intrinsic similarities. Additionally, contemporary architects often describe the surface of a building as its “skin” since, like the largest organ of the human body, the skin of a monument protects it from exterior aggressions, which nevertheless may leave permanent scars and other marks, altering its appearance.1

Reassessing the signifying power of monuments and their relation to the human body thus seems pertinent at this juncture in time when numerous monuments worldwide are the subjects of deliberation or condemnation for their religious, racial, and historical prejudices such as the effigies linked to colonial or pro-slavery eras in France, Portugal, South Africa, Ukraine, and in the United States.

Yet, rather than directly addressing specific historical events, the artworks by Martha Araújo, Milena Bonilla, Angelica Mesiti, Shitamichi Motoyuki, and Emilija Škarnulyte explore our everyday relationships to these seemingly immutable vestiges of the past, and, by extension, to History. By recognizing the importance of tactile and physical experiences of history, the works and the exhibition together expand cultural knowledge beyond visual manifestations.

This exhibition is an adaptation of If These Stones Could Sing, an exhibition presented at KADIST, San Francisco (February 7 – April 21, 2018).