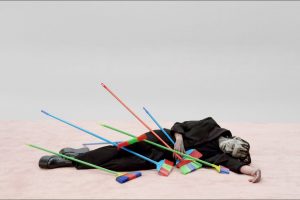 “Some assembly required” applies not only to the lasting global phenomenon of IKEA, but has become a foundational experience of making sense in art as well—for us as viewers, but first and foremost for the artists themselves. AP: Assembled Personalities dives into the topic of studio practice in art, film, theater, and performance at a time when the fake, the virtual, and the artificial have claimed their stake as persistent characteristics of our reality and our lives. The works presented here contribute to the staging and performing of the “real” inside the discourses of contemporary art.

Ghosts from all walks of life loom large in this episode of the KADIST online exhibition series. This is the one where Guy, Keren, Alex, Mark, and Ran reassemble the props, the camera angles, the stories and scripts, and above all the icons or iconic performances of the past. The episode celebrates the complexities of assemblage in five distinct settings and frames of references. Guy Ben-Ner seeks guidance in literature and film from Edgar Rice Burroughs’ Tarzan and Rudyard Kipling’s The Jungle Book, to François Truffaut’s L’enfant sauvage. Keren Cytter exploits personalities lifted straight out of Opening Night by John Cassavetes, fascinated by the sheer presence of an actress like Gena Rowlands. In a jarring counterpose, Alex da Corte, in his own terminology, “re-invents” the artist as an actor, playing Boris Karloff playing Frankenstein, in a studio void of any trace of narrative or history. Mark Leckey simply wants to look closely at Jeff Koons’ Bunny, but he wants to do so on his own terms and in his own studio. And in China, Li Ran sends a group of fellow tourists down the path of an unknown travelogue in the style of a Discovery Channel special.

In this exhibition, we witness the agency of assembled personalities both as an individual artistic gesture as well as a collaborative effort executed in the realm of the studio—the default domain of the artist. Contemporary personalities in their own right, the artists re-address art history (Mark’s appropriation of a Jeff Koons’ sculpture), education (Guy’s appropriation of pedagogical tropes), and the visual arts, moving across and beyond binaries based on the art/life divide (Alex, Keren, and Ran). While this approach is not exactly new, the context for grasping the effects of the real/fake or life/art divide has dramatically changed over the last ten years. As if Jean Baudrillard’s spectre of the simulacra, with its continuous mise-en-scène of the fake, had re-entered the contemporary discourse through the front door of mainstream media,  the videos in this online stream mediate the physicality and materiality of things, props, or bodies to produce a hybrid genre of moving image that grapples with the echoes of film, television, theater, and video. They share an interest in re-examining what forms contemporary sculpture might take, and what effects the theatrical visualization of sculptures might generate when the sculptural form cannot be tied to a binary of one or the other: the person or the actor, the real or the artificial identity. The iconic body or form is rather suspended in a blurry world of assembled identities and attempted forms. We, the public, however, are not spared either. While TV challenged film and theater by creating an experience for one home or one family, now, embedded in the digital network, we are an audience of one in front of our personal screen – often in the presence of other family members acting as their own “audience of one” as well. And we begin to recognize layers and layers of social and historical models, enriching but also complicating our relationship with these assembled personalities.

About the curator
Rudolf Frieling was appointed SFMOMA’s curator of media arts in January 2006. He has co-curated the retrospectives of Nam June Paik (forthcoming, premiered at Tate Modern London in 2019), Suzanne Lacy: We Are Here (2019), Bruce Conner: It’s All True and the survey Soundtracks (2017). Other exhibitions include Film as Place (2016), Christian Marclay: The Clock (2013), Lynn Hershman Leeson: The Agent Ruby Files (2013), Stage Presence: Theatricality in Art and Media (2012), Descriptive Acts (2012), Sharon Lockhart: Lunch Break (2011), David Claerbout: Architecture of Narrative (2011), and the influential survey exhibition The Art of Participation: 1950 to Now (2008). Frieling is also a senior adjunct faculty member at California College of the Arts. He studied English literature, social sciences, and philosophy at Freie Universität Berlin and received a PhD from Universität Hildesheim, Germany.

To watch the video, visit: https://kadist.org/watch/ap-assembled-personalities/