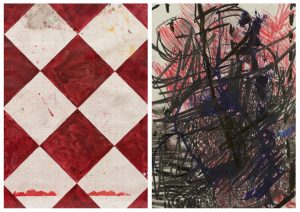 This dual solo exhibition of internationally acclaimed artists Zhang Enli (b.1965, Jilin province, China) and Oscar Murillo (b.1986, Colombia) marking Zhang’s first institutional presentation in mainland China since 2011, and Murillo’s first-ever exhibition in mainland China. By bringing together their most recent works, the exhibition attempts to establish a dialogue between the two artists and explore the conceptual affinities in their expansive oeuvre.

One of the most celebrated Chinese artists today, Zhang Enli is best known for his painterly observations on the more prosaic elements in everyday life. In recent years, Zhang has devoted himself to exploring alternative ways of experiencing painting, employing and drawing inspiration from a rich array of surfaces, sites and environments. This new direction in Zhang’s practice is highlighted in this exhibition through a succinct presentation of three of his most recent works. As the latest iteration of Zhang’s ongoing series of the same title, first launched in 2007, Space Painting sees the artist apply gouache directly to the walls of chi K11 art museum to create an immersive and nostalgic environment. Similarly, “Untitled (Tiles)” is a series of checkerboard paintings, installed on the ground to resemble tiles commonly used for flooring in the 1920s and ’30s Shanghai, while also evoking the surrealist imagery of the circus. Studio is a working studio that the artist built first during a one-month residency at The Royal Academy of Arts, London, as part of an artist-in-residence programme co-presented by K11 Art Foundation and the Academy. With this room-sized painting installation, Zhang extends his invitation to the viewer to enter, leaving traces that will become an integral part of the work. Crucially, with their sheer volume and lack of a traditional frame, the three works effectively transform spectatorship, challenging conventional ways of understanding our spatial relation with artefacts and the environment.

Similar to Zhang, Murillo also draws inspiration from his work environment—in this case, non-places like aeroplanes and hotels. As an international artist constantly in transit, this aerial view has informed the “flight series”; hung throughout the museum space, these drawings made by Murillo while in flight echo Zhang’s work in their obsessive mark-making. These drawings are but one facet of Murillo’s highly idiosyncratic practice that integrates video, painting, drawing and sculpture, a convoluted visual lexicon epitomized by The Institute of Reconciliation (2014–), a room-size installation of black canvases, brushed with thick black oil paint before being cut and then sewn back into new compositions and hung like laundry on clotheslines. Stitched, drawn or painted, the horizontal lines that run through Murillo’s work allude to the disorienting movements shaping our contemporary conditions: capital flows, flight paths and migratory routes. Murillo is interested in opening processes of globalization to artistic inquiry, and thereby articulating a nuanced understanding of the specific conditions therein; in this light, his frequent references to his home country Colombia through such materials as Mateos (in Collective Conscience and Human Resources) and corn (in Collective Conscience, Human Resources, The Institute of Reconciliation) should be seen not as a call for localism, but a metaphor for the displacement and flow of objects and ideas in global capitalism.